The Egyptian authorities have detained 25 members of the opposition Muslim Brotherhood, bringing to 39 the number arrested in 24 hours. 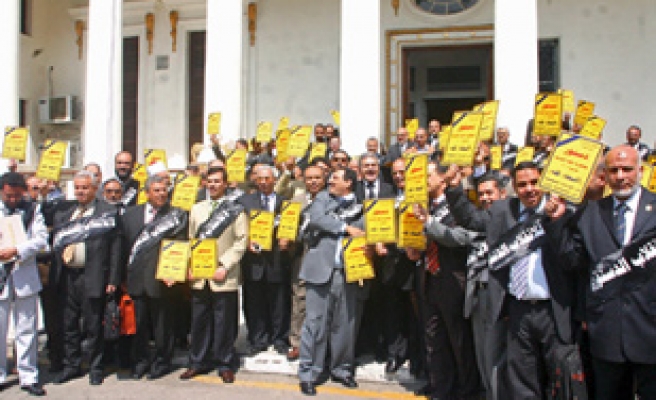 The Egyptian authorities have detained 25 members of the opposition Muslim Brotherhood, bringing to 39 the number arrested in 24 hours.

A security official said on Monday that 11 members of the group were arrested late on Sunday in the southern province of Beni Sueif, 120km south of Cairo, on charges of holding "a secret meeting".

Fourteen others were detained in dawn raids in the province of Sharqiyah, including Abdel Aziz Abdel Qader, who heads the group's Sharqiyah office.

On Tuesday, Egypt will close the door for candidate nominations for the election of parliament's upper house on June 11.

In the Sharqiyah raid, Egyptian forces stormed the home of Hossam Mohammed Abdel Salam and arrested 14 Muslim Brotherhood members on charges of holding a secret meeting and of being in possession of secret documents.

The Muslim Brotherhood is the largest and best organised opposition movement in the country, but it is also officially banned, leaving it open to periodic crackdowns.

Last week, the Supreme Administrative Court upheld a decision to have 40 members of the group tried by a military court.

The 40, including Khayrat al-Shater, the group's financier and third-ranking official, are accused of money-laundering and financing a banned organisation.

The group controls one-fifth of the parliament after fielding candidates as independents in the 2005 elections.

The Muslim Brotherhood announced in April it would field 20 candidates despite constitutional amendments approved in March that prohibit political activity on a religious basis.