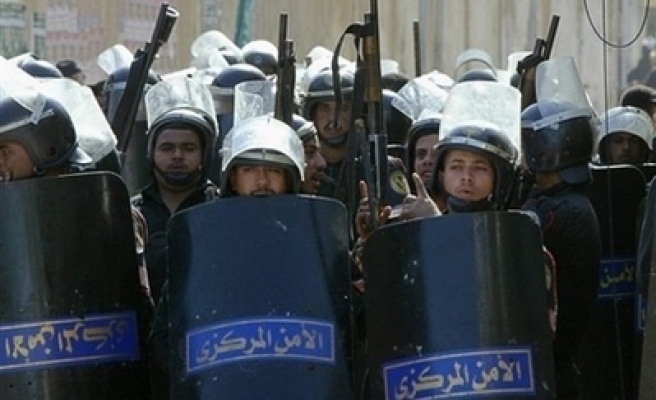 Police took George Ishak, one of the founders of the Kefaya group, from his home in Cairo around nightfall on Wednesday and charged him with inciting protests, the security sources said, speaking on condition of anonymity.

Kefaya, a loose alliance of liberals, leftists and Islamists, was formed in late 2004 to oppose another term for President Hosni Mubarak or any attempt to install his son Gamal as his successor.

The group had supported what it hoped would be nationwide protests against rising prices this week, but strong police presence, stormy weather and stern warnings from the government disrupted the plans.

"After about an hour of search his wife arrived and found them all over her house," the Demonstrators Defense Committee, a grouping of Egyptian human rights groups, said in a statement.

"Irritated by the heavy police presence in her house and their rude manners she asked them to leave the house. They refused."

Ishak, once head of Kefaya, had stepped down from that position more than a year ago but still played an important role in the group.

"This is a very bad signal," said Diaa Rashwan, political analyst at Al-Ahram Center for Political and Strategic Studies. "George was never known as an agitator and never called for violence...I suspect he will not be the last one."

Kefaya began to lose impetus after Mubarak won presidential elections by a large margin in September 2005.

Egyptian police took the 70-year-old leader of the group, Abdel Wahhab el-Messiri, from a protest in central Cairo in January and dumped him in a desert suburb.

Thousands of workers and youths clashed with Egyptian police in the Nile Delta textile town of Mahalla el-Kubra this week, adding pressure on Egypt's government over wages and rising prices.