Egypt Islamists cry foul in the run-up to key elections

The opposition Muslim Brotherhood demonstrated on Sunday against government attempts to block members from registering their candidacy in April's key local elections, a security official said. 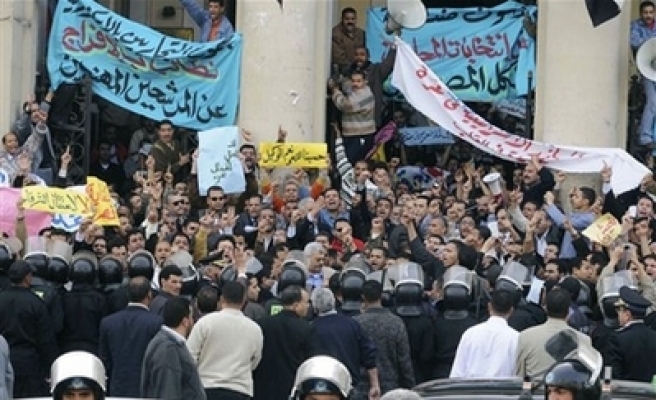 At least 5,000 members of the opposition Muslim Brotherhood demonstrated on Sunday against government attempts to block members from registering their candidacy in April's key local elections, a security official said.

"Over 5,000 members of the Muslim Brotherhood stood outside the governorate office in (the Nile Delta city of) Tanta to protest the fact that their members are blocked from registering," the security official said.

The Muslim Brotherhood put the figure at 10,000.

"For a fifth day running since the registration process began, our members' papers have not been accepted, with security forces surrounding the buildings allowing only members of the (ruling) National Democratic Party to register," the Brotherhood said on its website.

The government has recently intensified its crackdown against the Muslim Brotherhood -- the largest and most organised opposition group in the country -- ahead of the municipal elections scheduled for April 8.

Hundreds of members have been arrested in recent weeks, including senior leader Mahmud Ghozlan on Thursday.

The Brotherhood says the crackdown aims to block another election success after 2005 parliamentary polls in which the group won a fifth of seats through members standing as independents.

Last week, a member of the group was beaten by attackers when he tried to register his candidacy. The Brotherhood accused the ruling party of responsibility for the incident.

Traditionally dominated by the National Democratic Party, the municipal polls are expected to draw fierce competition after a constitutional amendment was passed in 2005.

The amendment requires independent presidential candidates to secure the backing of municipal councillors.