The world's five main emerging economies called for a greater say in the global decision-making process. 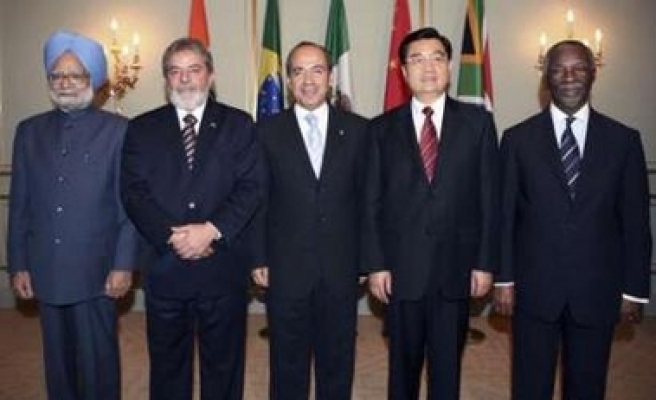 The leaders of India, China, Brazil, Mexico and South Africa issued the call at a meeting to coordinate their positions ahead of Friday's session with the Group of Eight (G8) in the German resort of Heiligendamm.

A statement released after the talks in a Berlin hotel said the five nations wanted to step up their efforts to ensure their voice is heard in decisions that affect the world's population.

They also planned to meet at regular intervals to discuss issues of common interest such as climate change, energy security and development, the statement said.

But he said he would have prepared something more concrete in the declaration, which said the G8 would give serious consideration to halving global greenhouse gas emissions by 2050.

The five leaders held a series of bilateral meetings earlier on Thursday to fine-tune their views ahead of the meeting with the G8 on the Baltic coast.

The two sides felt that industrial countries were the main perpetrators of climate change and are the ones that should carry the main burden in reversing it, they said.

Indian Foreign Secretary Shiv Shankar Menon said India believes the issue of setting targets to curb harmful greenhouse gas emissions should be conducted under the aegis of the United Nations.

Calderon said he wanted to use the G8 summit to deepen Mexico's political and economic ties 'with areas of interest different from the United States' and to try and attract European investment.

German Foreign Minister Frank-Walter Steinmeier conferred with Ban and foreign ministers of some of the main developing economies at a separate meeting Thursday evening.