Erdogan: Cyprus issue to be solved under roof of UN 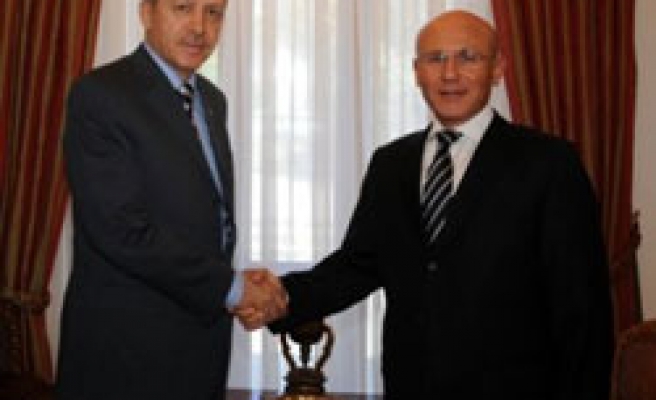 Turkish prime minister said on Saturday that the Cyprus issue would be solved under the roof of the United Nations (UN) and within the framework of the UN Secretary General's good will mission.

Erdogan said on Saturday that he attached importance to a meeting between Turkish and Greek Cypriot leaders.

Turkey supports reunification of Cyprus as a federation of two communities, Turkish Prime Minister Tayyip Erdogan said on Saturday, ahead of talks between Greek and Turkish Cypriots on the divided island's future.

Erdogan said that it could be possible to get a result (from talks) if Christofias approached a solution positively like Talat.

"The main criteria is a fair, comprehensive and permanent Cyprus formed by two nations and two founder states under a political equality," Erdogan also said.

"The solution will be developed within the framework of a new partnership relation to be formed between two founder states and two equal nations based on the realities in the island," Erdogan said during the press conference.

Erdogan said that the Turkish government had been displaying remarkable efforts in order to find a fair and lasting solution to the Cyprus issue.

Expressing Turkey's appreciation regarding the process recently initiated in Cyprus with the meeting of Turkish and Greek Cypriot leaders on March 21st, Erdogan said, "During their upcoming meeting, we are expecting the two leaders to agree on the date to start comprehensive talks".

Erdogan said that Turkey's economic support to TRNC and the country's efforts for the lifting of isolations on the Turkish Cypriot people would continue in a determined way.

"Turkey will continue to be with TRNC and to support this country just like it has been doing for years. Nobody should expect Turkey to quit this path, no matter which government is on duty in the country. All the world should understand that," he also said.

The Turkish Cypriot Mehmet Ali Talat president expressed his hope that he could make public resumption of fully-fledged talks with the Greek Cypriot leader in a week.

Talat said he was hopeful that Greek Cypriot leader Demetris Christofias and he could declare the resumption of comprehensive talks when they met again in the island on July 25th.

Talat said that Turkey was always standing by TRNC, and extending unconditional support to their country.

"We know that Turkey's support will be with us from now on, and I think this is very important in this sensitive process before us regarding the Cyprus problem," he said.

Talat said that Turkey and his country backed a permanent solution based on United Nations (UN) parameters.

"Turkish Cypriot side wants to settle Cyprus problem as soon as possible by a solution based on our political equality and equal status of bi-zonal two founder states," Talat said.

On water problem in the island, Talat said that Turkey was ready to extend every type of assistance.

"At first, we may transport water by tankers and then we can bring water to the island through a pipeline. In any cases, the Turkish premier said that Turkey would support transferring water to the Greek Cypriot administration," Talat also said.

Talat said that he had informed the Greek Cypriot authorities but they had not received a formal answer yet.