Prime Minister Recep Tayyip Erdogan suggested yesterday that Turkey had no plan to engage in a cross-border operation in northern Iraq, saying that anti-terrorism efforts must focus within Turkey. 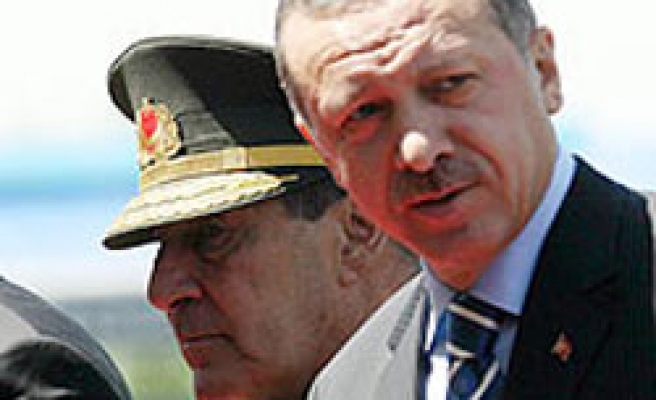 Prime Minister Recep Tayyip Erdogan suggested yesterday that Turkey had no plan to engage in a cross-border operation in northern Iraq, saying that anti-terrorism efforts must focus within Turkey.

Erdogan's remarks, made at a meeting with senior journalists, came hours before top-level talks between the government and the military on security.

A statement released after the nearly three-hour meeting said the participants, comprising the prime minister, the foreign minister, interior minister, chief of staff and commanders of the land forces and the gendarmerie, confirmed that countering terrorism was the top priority for Turkey and that this was an issue above "all interests and all types of political considerations."

The statement also emphasized that the fight against terrorism would be carried out "on the basis of democracy and the principle of supremacy of law" but with "strong determination and joint contribution and cooperation of all the relevant institutions.” It said there was "full harmony and coordination” among the government, the Turkish Armed Forces and security organizations in efforts against terrorism. “The threat against our country will be overcome,” the statement went on. "It has been noted with pleasure that our people stand in unity against acts of terror and that this spirit of solidarity and determination should be preserved.”

Erdoğan said: “There are numbers we receive. There are 500 terrorists in Iraq; there are 5,000 terrorists inside Turkey. Has the fight with terrorism inside Turkey ended so that we can think about the luxury of dealing with 500 people in northern Iraq?” Asked to elaborate on the figures, Erdoğan said he cited them randomly for the purpose of an example. The government has been under pressure of the General Staff and of a nationalist wave brewing among the public to enter northern Iraq so as to crush the source of separatist terrorism in Turkey. The nationalist fervor has been on the rise due to frequent funerals of martyrs lost to terrorist attacks.

The General Staff has also asked for authority to penetrate into northern Iraqi territory to attack bases of the outlawed Kurdistan Workers' Party (PKK) there. Some retired generals have publicly criticized the government for lack of will and determination to fight terrorism and an unwillingness to cooperate with the armed forces.

Prime Minister Erdoğan slammed these "retired generals, pashas who have been going from one television station to another and engaging in an effort to create a negative psychological atmosphere through utilization of expressions that trespass borders of respect." Erdoğan also criticized the rumors that he is not meeting with the chief of General Staff or that he is not on good terms with the president. "We are speaking on the phone; we do this and when necessary we come together also. We have routine meetings with the president. On occasions we skip one week, and there you will find the press questioning what is going on in between the president and the prime minister," complained Erdoğan.

The prime minister also reiterated that his government does not have a problem with either Chief of General Staff Gen. Yaşar Büyükanıt or high-ranking officers. Noting that the Higher Counterterrorism Council has met once again during their term, the prime minister also informed journalists that the council is running its activities under the presidency of Foreign Minister Abdullah Gül.

Erdoğan reminded the journalists of the fact that he was supportive of the March 1 resolution that would have allowed Turkey to deploy troops in northern Iraq in return for military cooperation with the US on the Iraq war in 2003. “It is well known who showed a negative reflex to this at that time. Today, those who then said ‘no’ are continuously speaking about an incursion into northern Iraq today,” Erdoğan said. The opposition parties openly rejected cooperation with the United States in the Iraq war then and the military faced criticism for not speaking in favor of the motion in order to help win consent of the skeptical deputies in Parliament. Erdoğan also said the constant talk of a cross-border operation damaged relations with Iraq as well and added that an invitation to Iraqi Prime Minister Nouri al-Maliki to visit Turkey was under consideration.

Commenting on Prime Minister Erdoğan’s words, Deputy Chairman of the Republican People’s Party (CHP) Onur Öymen said the number of the terrorists in Iraq is not important at all. “The headquarters is there, the ammunition, the training grounds are there. It is true that there are 5,000 terrorists in Turkey, but their needs are provided for from northern Iraq,” said Öymen. He also suggested that the government is bowing to the American position that Turkey should stay at home and wait for the attack and take measures accordingly.

“Is there any other country in the world that waits for the threat and fails to protect itself? The chief of general staff said on April 12 that an operation is necessary. Doesn’t he know the number of terrorists in northern Iraq? Doesn’t he know what those terrorists do there? Of course he knows and acts accordingly. But the prime minister does not know. The only thing this government knows is not to make the US angry; to satisfy the Americans at any cost,” Öymen said.

Oymen also claimed that this government promised not to intervene in northern Iraq “in return for a $1 billion donation made by the US in Dubai on Sept. 22, 2003.” “They didn’t even bring this agreement to Parliament,” claimed Öymen. He suggested that the government should at least have the authority to send soldiers to a foreign country passed by Parliament. “This authority would serve as a deterrent, at least,” Öymen said.

Justice and Development Party (AK Party) candidate Ertuğrul Günay said the prime minister’s words should have been understood as an effort to increase awareness about a disinformation campaign. “This government is working with the armed forces and has given the necessary orders to the armed forces again and again. If the government and the Parliament decide that a cross-border operation is necessary, necessary steps will be taken. But it is a fact that there are things to be done and measures to be taken beforehand domestically,” Günay said.

Commenting on the prime minister’s speech, the parliamentary Internal Affairs Commission Chairman Ziyaeddin Akbulut said the prime minister’s speech is valuable in that it increased public awareness on the multi-dimensionality of terrorism. “We have been fighting with terrorism for over 20 years and have not been able to finish off its domestic sources. Why? If you focus on only the foreign connections, this weakens the fight with terrorism,” Akbulut said.

Meanwhile, the PKK offered a renewed cease-fire and blamed the Turkish military for the recent increase in violence, according to a statement carried by Fırat news agency, a mouthpiece of the group.

“We openly declare that if the operations cease, the tensions will also cease,” the statement said, claiming that the PKK attacks were the result of “self-defense and the use of our right of retaliation to losses.” It said: “There has been a marked increase in [army] operations despite the fact that the unilateral cease-fire that our movement has been keeping since October 1 has not been formally abolished.”

The statement also said the government should halt military attacks in order to hold the upcoming general elections, scheduled for July 22, in a secure climate. “Our forces will be careful and responsible,” it said.