Erdogan says fight against PKK is in Turkey, not Iraq

Prime Minister Tayyip Erdogan signaled on Tuesday Turkey should focus on battling PKK at home rather than in northern Iraq. 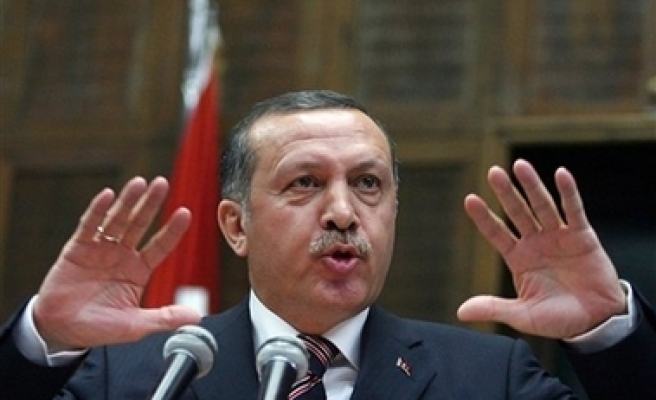 Prime Minister Tayyip Erdogan signaled on Tuesday Turkey should focus on battling PKK at home rather than in northern Iraq.

Upon a question by journalists about protests in yesterday's funerals of three martyrs who were killed when a remote-control explosive planted by the terrorist organization PKK on a road in Guclukonak town in the southeastern city of Sirnak went off on June 9th, Erdogan said that the Ministry of Interior Affairs launched a criminal investigation into protests.

"No one has to right to describe our government, which has been been trying to rule the country with self-sacrifice, as 'murderer'. This is an unbearable attribute. Such protests are totally inappropriate during funerals of martyrs. There may be members of political parties and event members of different organizations among those protestors," he said.

"Some circles are trying to create the impression that General Staff Chief Gen. Yasar Buyukanit and I do not talk to each other. Such allegations are totally wrongful. Gen. Buyukanit, President Ahmet Necdet Sezer and I hold weekly routine meetings. Also, we hold telephone conversations from time to time," he said.

"The government, all political parties and all non-governmental organizations should create a national platform in our fight against terrorism. No one should be allowed to benefit from funerals of martyrs for their own political purposes. However, I regret that some retired generals seem to create a negative psychological climate by using expressions which exceeds limits of respects in their interviews with TV channels. What we urgently need at this point is to ease social tensions and safeguard social peace," he stressed.

Erdogan told reporters that he might invite Iraqi Prime Minister Nuri al-Maliki to Turkey in the coming days or weeks to discuss issues.