Erdogan stressed that "Turkey conducts its relations with the countries of the Middle East and other regions based on dialog, friendship and brotherhood. 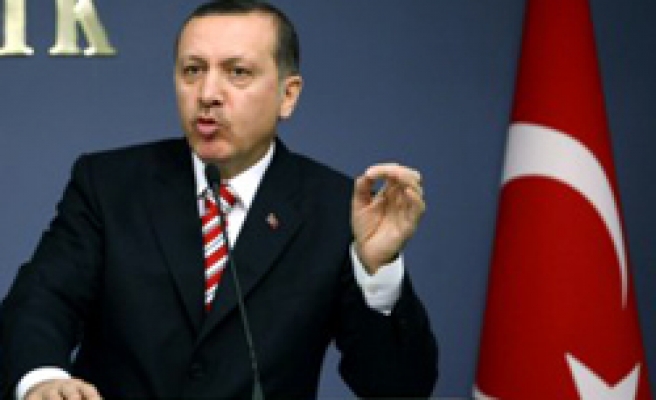 Erdogan spoke to Turkish ambassadors over a consultation meeting in Ankara Palas Hotel on Wednesday.

"We are locked on to the goal of Turkey's full membership in the EU. We are progressing with determination. It is out of the question for Turkey to accept an alternative other than full EU membership or to give up the reforms needed in this process," Erdogan said.

"Turkey has become a country that is conducting entry negotiations with the EU. Turkey's relations are deeper, beginning with its neighboring countries, as well as other countries in the distant corners of the world. Turkey's exports were worth 36 billion USD five and a half years ago. Turkey's exports today are worth 125 billion USD. As of the end of 2007, direct foreign investments in Turkey were worth 22 billion USD. For many years, direct foreign investment in Turkey did not exceed 1 billion USD per year," Erdogan said.

"Turkey's investments overseas are also on the rise. Turkish contractors' sector is the world's third largest one after the U.S. and China," Erdogan said.

"In addition to all of these realities, Turkey is mediating talks between Israel-Syria and Israel-Palestine. Turkey has an effective role in the preservation of stability in Lebanon and Iraq. All relevant developments point out to Turkey's increasing role in the international arena," Erdogan said.

"For years, Turkey was defined as a country with a strategic position. Turkey was defined as a bridge between Asia and Europe. But these were only words. Only in the past five and a half years have these comments become meaningful. Turkey is no longer just a country uniting Asia with Europe. Turkey is a country that helps civilizations meet from five continents. Turkey has become a country that seeks solutions to international clashes, tensions and problems," Erdogan said.

"Turkey works for humanity's tranquility and peace in the Middle East, Caucasus, Balkans and Africa. I frequently say that Turkey is not a country whose agenda is determined by others. Turkey has become a country that determines the agenda globally," Erdogan stressed.

Touching on relations with Iraq, Erdogan said that "Turkish-Iraqi relations are today based on a strong cooperation despite being in a state of crisis just a few months ago due to Turkey's military operations in north of Iraq against the terrorist organization. We have opened a new page, after my recent visit to Iraq, on many issues such as the fight against terror, cultural activities, oil exploration and transportation."

In reference to Turkey's ties with Middle Eastern and other countries, Erdogan stressed that "Turkey conducts its relations with the countries of the Middle East and other regions based on dialog, friendship and brotherhood. Friendship has been promoted in our region."

"Turkey and all of the countries in the Middle East share a common history, culture and belief. Turkey is working so that such common traits are turned into cooperation in the future," Erdogan said.

"Turkey is in a new position in the region thanks to its relations with Israel and Palestine. Turkey played an important role in the compromise reached in Lebanon," Erdogan said.

"It is our hope, as Turkey, to see a peaceful solution to Iran's nuclear program," Erdogan stressed.

"Cyprus is one of the priorities of Turkish foreign policy. We are determined to support a constructive approach for peace in the island. We will be in the Turkish Republic of Northern Cyprus (TRNC) this coming weekend with a large delegation. We will attend inauguration of new facilities and join in the celebrations of the TRNC. We will continue to support the efforts made within the framework of the United Nations for a comprehensive solution in the island," Erdogan said.

Erdogan said that "Turkey has received great support from many nations for its non-permanent membership at the UN Security Council."

The UN Security Council would vote on the non-permanent membership in the upcoming months.

"Disregarding changes in the world and not getting ready for the changes would withdraw Turkey from world matters. The Turkey of the future must be one whose citizens enjoy high levels of freedoms and wealth, and must be a country that gives confidence to its global friends and helps spread peace in the world. You, as Turkey's ambassadors, would help Turkey reach its goals globally. I realize that, at times, you work under very difficult conditions in five continents throughout the world. I would like to remind you that your efforts contribute to the wealth, security, and bright future of the Turkish nation. Cooperation and friendly relations with each country would turn back as Turkey's benefit. Your efforts to help Turks feel at home in foreign countries and to help these Turks integrate in foreign societies carry high importance. I wish you all success in your future tasks and hope that the conference of Turkish ambassadors in Ankara would be fruitful and beneficial," Erdogan also said.