Erdogan: 'We want to solve all problems with Bulgaria'

Bulgarian premier apologized for conduct of deputies of the ATAKA party earlier in the day due to which the press conference of the two leaders was cancelled. 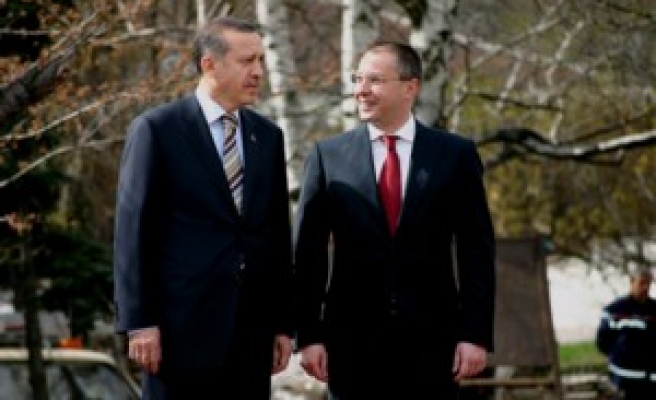 Turkish Prime Minister Recep Tayyip Erdogan noted Thursday that relations between Turkey and Bulgaria had been developing in every field, saying "we want to solve all problems with Bulgaria."

On the third stop of his visit to the Balkans, Erdogan held a a joint press conference with his Bulgarian counterpart Sergei Stanishev after his meetings in capital Sofia.

Erdogan said last fours years have seen a remarkable development in Turkish-Bulgarian relations especially in trade, adding that the trade volume between the two nations had reached 4 billion USD.

"Our common goal with Stanishev is to further increase that volume to as high as 10 billion USD," Erdogan said.

Erdogan said Turkey was happy to see progress that Bulgaria had made, and thanked the Bulgarian government for its support for Turkey's membership in the European Union.

Erdogan noted that Tunca Dam was also taken up during the meetings, saying that the dam project should be realized as soon as possible.

"We see great benefit in completing technical work and our two countries' determination will do it," Erdogan said.

Stanishev said on his part that issues which are inherited from the past between two countries could be solved one by one, adding that "a new dynamism is needed."

Bulgarian premier also apologized for conduct of deputies of the ATAKA party earlier in the day due to which the press conference of the two leaders was cancelled.

Erdogan and Stanishev attended a dinner at a military guest house after their press conference.

Meanwhile, a cooperation protocol was signed between Turkey and Bulgaria on education, science and culture for 2008-2010.