Erdogan:'Caspian gas pipeline will pass from Albania too'

Turkish PM Erdogan said that the project on pipeline --which will transfer Caspian natural gas to Italy via Turkey-- will pass from Albania too during joint press conference with Albanian PM. 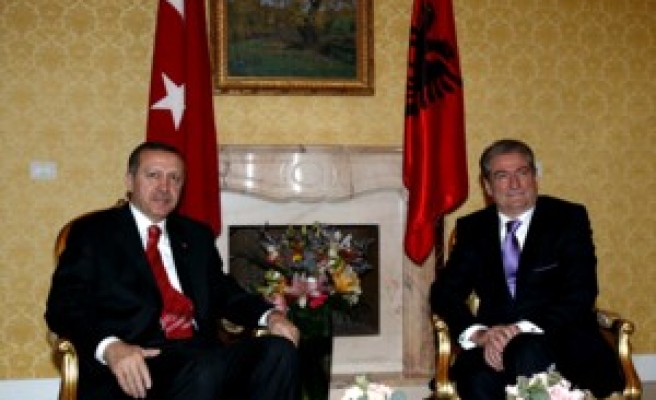 Prior to the press conference, Turkey and Albania signed a framework program on cooperation in areas of education, science, culture, art, youth & sports, press and communication.

During the press conference, Berisha said trade volume between Turkey and Albania --which was 35 million USD in 2002-- reached 630 million USD today.

Berisha also extended support for Turkey's EU membership bid, and stressed that Turkey must be in the EU.

Erdogan promised him that the project on pipeline --which will transfer Caspian natural gas to Italy via Turkey-- will pass from Albania too, Berisha said and added that development of Turkish-Albanian relations is important for the region.

On the other hand, Erdogan said Albania has an important place in Turkish foreign policy, and for the last 17 years, Turkey has supported Albania in every area; and this support will continue in the future too.

Turkish investments in Albania should be diversified, Erdogan said and noted that both countries have a serious infrastructure and background in tourism.

Erdogan also said the number of Albanian students who receive education in Turkey can increase.

Erdogan said Turkey will support membership of Albania (besides Macedonia and Croatia) during the NATO Summit which will take place in Bucharest next month.