A meeting between PM Erdoğan and Land Forces Commander Gen. İlker Başbuğ has given rise to much speculation. 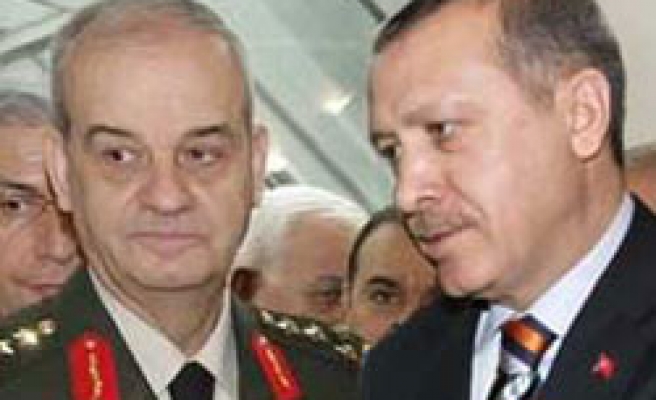 A meeting between Prime Minister Recep Tayyip Erdoğan and Land Forces Commander Gen. İlker Başbuğ late Tuesday has given rise to much speculation, with many alleging that the meeting made definite Başbuğ's nomination as the new chief of general staff and others claiming that the prime minister requested that the military refrain from interference in political and civilian life.

Erdoğan met with Gen. Başbuğ at the prime minister's official residence, and a written statement released by the Prime Ministry Press Center said the two discussed measures to be taken against terrorist activities in the days ahead and recent developments in the country. But several circles have already ascribed various different meanings to the meeting. Many said Erdoğan's meeting with Başbuğ hints that the prime minister has already acknowledged the latter's prospective nomination as the new chief of general staff, pointing to the timing of the meeting, only a month before the Supreme Military Council (YAŞ) gathers on Aug. 1. YAŞ decides the promotions and retirements of Turkish Armed Forces (TSK) personnel.

Başbuğ is widely expected to succeed current Chief of General Staff Gen. Yaşar Büyükanıt when the latter retires in August. This expectation even grew stronger after Erdoğan invited Başbuğ to his residence for a meeting. Many others, however, claimed the meeting had a deeper meaning than what is visible or attributed to it, citing a previous meeting between Erdoğan and Büyükanıt.

Erdoğan and Büyükanıt met on May 4, 2007, only a few days following the release of an e-memorandum posted on the General Staff's Web site on April 27 warning the government over upcoming presidential election. The gathering was held at Dolmabahçe Palace in İstanbul and lasted more than two hours. It was not announced on official schedules and was closed to the press. No public statement was made after it, which gave rise to speculation that Erdoğan had threatened Büyükanıt with a report prepared about the general's wife's excessive spending in an attempt to put a stop to military pressure on the government while trying to elect Abdullah Gül president.

The allegation, voiced by former Culture Minister Birgün Fikri Sağlar, was later brought before the judicial system. Büyükanıt said he had never been subjected to such a despicable insult and decided to take the issue to the court. "I was subjected to unbelievable claims. The issue has been conveyed to the judiciary," he stated.

Some circles now wonder whether a similar conversation could have taken place between Erdoğan and Başbuğ during Tuesday's meeting to prevent the military from interfering in political issues.

It is also rumored the two met to discuss a comprehensive cross-border operation into northern Iraq to stamp out outlawed Kurdistan Workers' Party (PKK) terrorists there. Erdoğan reportedly asked Büyükanıt about the new tactical reconnaissance attack (ATAK) helicopters at a ceremony held on Tuesday at Turkish Aerospace Industries (TAI) to introduce ATAK helicopters, which went into production this week, to the press.

Büyükanıt allegedly replied by saying that the prime minister would be briefed by Başbuğ, and then the latter paid a visit to the prime minister to give him information on the ATAK helicopters. Some circles interpreted this meeting's proximity to the ceremony as preparation for a large-scale cross-border operation against PKK targets in northern Iraq. Another factor that makes people speculate about the meeting is an alleged military plan to reshape society that the Taraf daily exposed last week.

A leaked army document published in Taraf showed that the TSK had devised a comprehensive plan of action to interfere in politics and civilian life. The army's plan went into force in September 2007 and is composed of a series of "measures" against the government, which the military deems the source of a "religious reactionary movement." The plan also emphasized that it was necessary to bring universities, presidents of the higher judiciary, members of the presss and artists into line with the TSK because they have the power to influence public opinion, and to ensure that these individuals act in the same way as the TSK.

According to some, Erdoğan invited Başbuğ for a meeting to discuss this action plan and warn the TSK not to attempt to influence civilian and political life in Turkey.

The Prime Ministry Press Center, on the other hand, released a written statement soon after the meeting to dissipate speculation over the gathering.

"Our esteemed prime minister held a meeting with Gen. Başbuğ this evening at his residence. The meeting was held upon the invitation of the prime minister. The two discussed measures to be taken in the fight against terrorist organizations in the days ahead and some recent developments in the country," read the statement.

Speaking to journalists yesterday, Başbuğ also stressed that he and Erdoğan met at the prime minister's initiative. "The meeting was held upon the invitation of the prime minister and with the permission of our chief of General Staff. We discussed counterterrorism methods and what measures should be taken in our fight against terrorism and terrorist organizations in the coming periods. Speculation about our meeting that has appeared in some press organs do not reflect the truth," he said.