The ruling AK Party)was not the only government a shady criminal group, whose leaders are currently in jail, has tried to overthrow by force, newspaper reports stated yesterday. 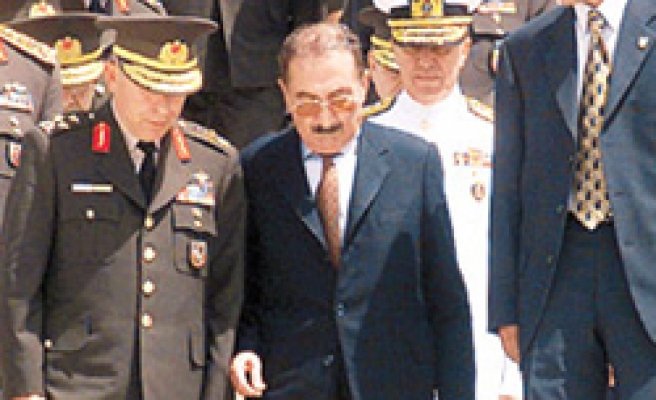 The ruling Justice and Development Party (AK Party) was not the only government a shady criminal group, whose leaders are currently in jail, has tried to overthrow by force, newspaper reports stated yesterday.

The indictment against Ergenekon, a shadowy criminal network made up of retired -- and possibly current -- army members, academics, journalists and others allegedly plotting a coup against the government, was presented to court on Monday. This action came a year after the investigation started, when police discovered in July 2007 a house full of ammunition and guns in İstanbul's Ümraniye district. The suspects are accused of a number of crimes including "membership in an armed terrorist group," "aiding and abetting an armed terrorist organization," "attempting to destroy the government of the Republic of Turkey or to block it from performing its duties" and "inciting people to rebel against the Republic of Turkey."

The prosecutors also suspect that the group is behind a 2006 Council of State shooting that left a senior judge dead and a hand grenade attack on the Cumhuriyet newspaper's İstanbul office, also in 2006.

The indictment has not yet been made public, but parts of it have been leaked to the press. The group attempted another coup d'etat against a coalition government formed under former prime minister and late politician Bülent Ecevit between 1999 and 2002. On Wednesday head of Ecevit's Democratic Left Party (DSP) Zeki Sezer confirmed that some retired senior generals at the time had "expressed their wish" to see Ecevit resign.

DSP İzmir deputy Recai Birgün, who was the security chief for Ecevit, also confirmed that they were in the know about the group's operations against the DSP in those days. "We were aware that they were carrying out an operation. We were trying to take measures against it but these things were coming so fast one after another that they completed the operation even before we could understand what was going on," he noted.

"A large part of the media, businessmen, bureaucrats and politicians in those days were part of the Ergenekon operation against the DSP," Birgün said.

He also recalled that Prime Minister Recep Tayyip Erdoğan had admitted being aware of the existence of Ergenekon and the coup plans against his government. Birgün criticized the prime minister, saying: "You've known this for seven years; why didn't you take any steps? Why didn't you file any criminal complaints if you knew? We believe Mr. Prime Minister knew much more than what we had known in our times. His party was brought to government thanks to the operation they staged against us as a single-party government. We invite the prime minister to announce all that he knows," he said, also claiming that the prime minister was an accomplice of the Ergenekon organization for not speaking up.

Unresolved murders in the indictment

The prosecutors accuse Ergenekon of having plotted to become the "secret dominant power in Turkey" and also of having ties with the terrorist Kurdistan Workers' Party (PKK) and its jailed leader, Abdullah Öcalan. The indictment notes that all famous columnists and journalists in Turkey are blacklisted and categorized as supposedly working for different intelligence agencies such as the National Intelligence Agency (MİT), the US' Central Intelligence Agency (CIA) and Israel's intelligence service MOSSAD.

Currently, the İstanbul 13th Higher Criminal Court is reviewing the 2,500 page indictment, which, according to news reports, also has found evidence linking the group to unresolved murders of journalists and political figures, such as the assignations of journalists Ahmet Taner Kışlalı, Uğur Mumcu and former Gendarmerie Commander Gen. Eşref Bitlis.

Hundreds of political murders, assassinations, shootings and attacks perpetrated between the years 1991 and 2007 have found their way into the indictment against the Ergenekon suspects based on evidence seized in searches and raids in the homes and offices of the suspects. The prosecutors also believe that the group is behind the murder of prominent businessman Özdemir Sabancı and two other people in 1996 at the Sabancı Business Center in İstanbul by Revolutionary People's Liberation Party/Front (DHKP-C) member Fehriye Erdal and her accomplices.

Sources close to the investigation say the financial network of the organization is currently being investigated, but it has not yet been fully understood. However, the indictment does voice the suspicion of the prosecution that the group has ties to the drug trade.

Groups from every segment of society

Documents seized in the homes and offices of the suspects have significantly clarified the structure of the organization, which apparently had smaller units it classified as "right-wing," "leftist," "sect members" or "Islamic fundamentalists" and which are completely unaware of each other. However, according to one suspect's testimony, during one meeting in which ultra-nationalist and leftist groups nearly clashed with each other, the groups stopped aggressive action toward one another when leaders said, "We are here for the same reason." The prosecution also has evidence that the organization treated diverse ethnic groups as enemies.

Meanwhile, news reports wrote that the prosecutors will not prepare an addendum to the indictment for charging suspects arrested in the final wave of the Ergenekon detentions earlier this month, but they will be pressing charges in a separate court case.

İstanbul Chief Prosecutor Aykut Cengiz Engin on Monday announced at a press conference that a long-awaited indictment against suspects in the Ergenekon investigation had been completed and submitted to a higher criminal court for review.

Engin said the suspects are being accused of various crimes, such as "membership in an armed terrorist group," "aiding and abetting an armed terrorist organization," "attempting to destroy the government of the Republic of Turkey or to block it from performing its duties," "inciting people to rebel against the Republic of Turkey," "being in possession of explosives, using them, and inciting others to commit these crimes," "inciting others to stage the 2006 Council of State shooting and a hand grenade attack at the Cumhuriyet newspaper's İstanbul office," "acquiring secret documents on national security," "recording personal data," "encouraging soldiers to disobey superiors," "openly provoking hatred and hostility" and other similar crimes. He did not clarify which suspects were accused of which crimes.

The indictment submitted to a high criminal court on Monday against suspected members of an organization behind several failed coup attempts in a period spanning nearly two decades is likely to result in the reopening of cases long closed or dismissed as it is filled with references to past events believed to have been perpetrated by units linked to the group.

The indictment accuses 85 suspected members of Ergenekon -- a shady network with links to parts of the media, military, bureaucracy and other state agencies -- of attempting to overthrow the government of the Republic of Turkey by force. Retired senior generals are also among some the suspects under arrest pending trial.

Some of the incidents in Turkey's recent history that the prosecutors think are linked to Ergenekon include a shooting at the Council of State in 1996, the assassination of scientist Necip Hablemitoğlu, members of the Democratic Society Party (DTP) who mysteriously disappeared and were found murdered in 1994, as well as incidents at İstanbul's Alevi-dominated Gazi neighborhood where tens of people died in riots that began after a shooting in 1995, the assassinations of businessman Özdemir Sabancı in 1995, former gendarmerie commander Gen. Eşref Biltis in 1993 and journalist Uğur Mumcu also in 1993, a hand grenade attack at the Cumhuriyet daily in 2006 and a large number of unresolved murders.

İbrahim Çiftçi, a witness who testified during the murder investigation of Hablemitoğlu, was killed in 2006 in İzmir by a hand grenade attack. The content of the indictment is likely to have an influence on the course of the Çiftçi murder trial as the court had postponed its final ruling until after the Ergenekon indictment is released. Durmuş Anuçin, who confessed to both the killing of Çiftçi and Hablemitoğlu, has also testified to the prosecutor on the Ergenekon case, giving information connecting these two murders with the Ergenekon gang. The testimony of another Ergenekon suspect also confirmed the suspicions of a link between the gang and the scientist's murder.

The families of two Kurdish politicians who disappeared seven years ago after being detained by the gendarmerie had filed a criminal complaint against retired Brig. Gen. Levent Ersöz over his alleged role in the disappearances. Ersöz is being sought as a suspect in the Ergenekon investigation. He is currently believed to be in Russia.

Families of those injured in the Gazi incidents of 1995 had filed a criminal complaint against Osman Gürbüz, who is currently in jail as an Ergenekon suspect.