Reportedly handwritten by retired Gen. Şener Eruygur, the documents talk of a four-stage plan that would have started with anti-government rallies beginning as early as July 7 and eventually lead to a coup. 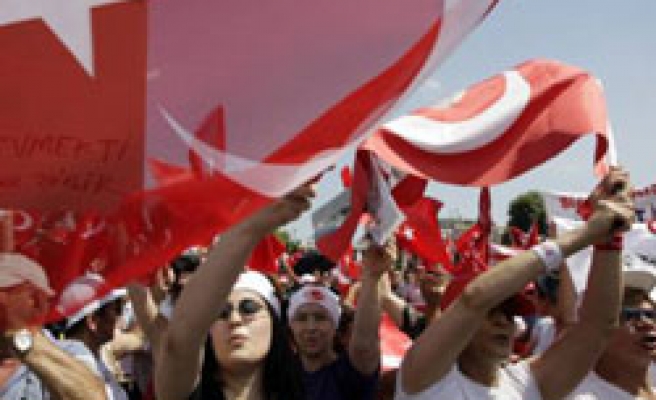 Over 20 people were detained last week during an investigation into shadowy ultranationalist group Ergenekon, but their plans to generate a coup through stirring up a chaotic environment, as revealed during last week's raids, seem in place if recent demonstrations are any indication.

Documents seized in raids on Tuesday and Wednesday, during which more than 20 people were detained, including three retired senior army generals, revealed that the organization was planning to launch a campaign to generate civil unrest in the first week of July. Reportedly handwritten by retired Gen. Şener Eruygur, ex-commander of the Gendarmerie Forces and who now heads the staunchly secularist Atatürkist Thought Association (ADD) the documents talk of a four-stage plan that would have started with unauthorized anti-government rallies beginning as early as July 7 and eventually lead to a coup and establishment of a new government. As part of the campaign of chaos, public confidence in the government and its economic performance was also to be undermined.

In the southeastern city of Gaziantep a demonstration organized by the Bizkaçkişiyiz (How many are we?) group, led by staunchly secularist nationalist Tuncay Özkan, yesterday protested criticism directed at the judiciary over a closure case filed by the country's top prosecutor against the Justice and Development Party (AK Party). The ruling party is charged with becoming a "focal point for anti-secular activities."

The demonstration, called "Respect for the State of Law," protested criticism of Abdurrahman Yalçınkaya, the prosecutor who seeks to shut down the AK Party and bar 71 of its former and current members from engaging in party politics for five years. Özkan himself attended the Gaziantep gathering.

Another demonstration, "Respect for an Independent Judiciary," was held in İstanbul on Sunday with a similar purpose. Protesters included members of the ADD and other Kemalist and secularist organizations that make up the Bizkaçkişiyiz movement. Demonstrators held aloft posters of Mustafa Kemal Atatürk, the founder of the Republic of Turkey, and waved Turkish flags as they chanted, "Turkey is secular, will remain secular," and anti-government slogans.

Documents seized in last week's detentions at an army facility frequented by retired Gen. Eruygur and his friends outline plans to trigger a coup. According to these plans, widely reported in last week's media, rallies backed by Eruygur's ADD were to start at the same time in 40 provinces today, July 7, with the aim of provoking clashes between police and demonstrators. Journalist Özkan was expected to play a key role in these rallies.

The second leg of the plot involved a number of assassinations of senior members of the judiciary by a team of 30 men under the orders of an individual referred to in the documents as O.G.

The third part of the plan envisioned campaigns to show that Turkey's economy was in severe decline. To this end, the powerful chairman of the Ankara Chamber of Commerce (ATO), Sinan Aygün, also detained on Tuesday, would make public statements declaring that the economy was in a state of alarming decline. ATO Chairman Aygün was also to set up a political party that would offer an alternative to the AK Party.

Another important part of the plan included intervening in this year's Supreme Military Council (YAŞ) meeting to prevent the promotion to higher ranks of members of the military known as being "pro-NATO."

During this process Tercüman Editor-in-Chief Ufuk Büyükçelebi, Cumhuriyet Ankara Representative Mustafa Balbay and their partners in the media would publish news stories emphasizing that the country had entered a period of crisis.

Both journalists and Aygün were detained in operations into Ergenekon last week.