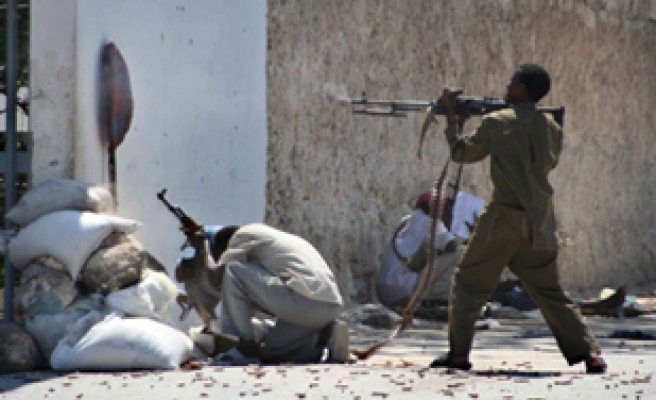 "We are under heavy artillery and tank shelling. The Ethiopians are using whatever forces and material they have," said a fighter belonging to the capital's dominant Hawiye clan.


Anti-government fighters have fired back with machineguns, missiles and rocket-propelled grenades as fighting raged on Thursday.

"This is the heaviest attack we've seen since the war started," the fighter said.

After a night of sporadic shelling, columns of Ethiopian tanks ploughed into northern Mogadishu, firing mortars and rockets onto suspected enemy positions, as machinegun fire ricochetted across neighbourhoods.

Terrified civilians scrambled to escape stray bullets as buildings were set on fire and Mogadishu was transformed into a virtual "ghost town", residents said.

"The heaviest fighting is raging this morning. They are exchanging everything they have, from bullets from anti-aircraft shells, no-one can put his head up," said Salah Doli, a resident of Jamhuriha area.

"Mortars have hit shops and buildings destroying them and setting others ablaze," he added.

"As I was fleeing my home, I saw several bodies lying in the streets," he said.
"This is some of the heaviest fighting ever in northern Mogadishu."

Locals, officials and human rights activists say nearly 300 people have been killed in a week of clashes.

The United Nations says nearly 340,000 people have fled the city, which was once home to at least one million people, and it has warned of a looming catastrophe.

The Somali government has said there will be no let-up in the fighting until it wipes out the anti-government fighters.