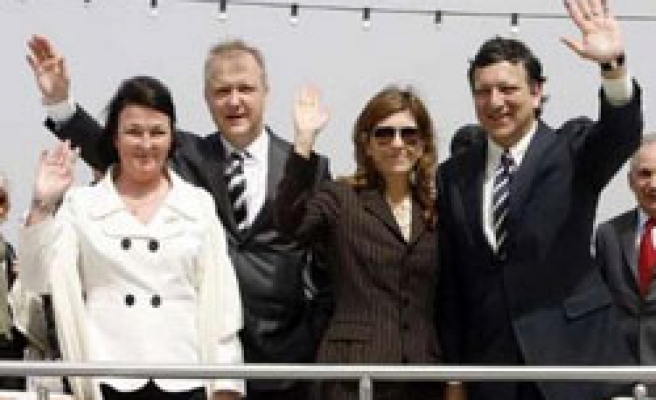 The European Union's top official has maintained the union's firm stance, which questions the validity of a closure case opened against Turkey's ruling Justice and Development Party (AK Party) as well as his view that the issue of wearing a headscarf is a matter of individual freedom, Today's Zaman reported.

At the end of his three-day talks with Turkish officials, academics and representatives of nongovernmental organizations, Barroso said on Saturday he observed that Turkey has the necessary dynamism and flexibility to overcome its existing problems.

Barroso, speaking with a small group of journalists in İstanbul before departing from Turkey, said he could not understand why he was criticized for his remarks on the headscarf issue.

"I understand the importance of the current debate on secularism for Turkish society. In various periods of their recent history, EU member states have also gone through such debates. But each of them found its own internal compromise. I hope Turkey will do the same. Therefore, do not expect the European Commission to take a position and to impose standards on issues such as the headscarf -- because the EU has none. The only crucial principle that it is essential to defend is tolerance for each other's beliefs and opinions -- in this case, the free choice of every woman, whatever her belief or opinion," Barroso said on Thursday while addressing members of the Turkish Parliament. His remarks, which label the headscarf issue a matter of freedom, have sparked reactions from some newspapers and women's organizations, saying that Barroso "was not aware of realities in Turkey" and suggesting that a considerable number of those women were actually wearing headscarves not out of their own will.

"Should I object to women's freedom of choice? I have always favored freedom. These are freedoms vis-à-vis family pressure, state pressure and religious pressure. Individual freedoms are one of the keystones of the EU and it is an nonnegotiable issue. I've already said in my speeches that I don't want to get involved in discussions concerning the headscarf issue and that the EU cannot say anything concerning how the headscarf issue can be solved. This solution will be produced by the Turkish society," Barroso told journalists, when reminded of the criticism his earlier remarks had attracted.

When asked whether the EU would not interpret it as a sign of the strengthening of religious movements if one day Turkey lifts all bans on wearing the headscarf, Barroso said: "You cannot hide this if the majority of a country is Muslim. And there is no need for doing so either. Actually, the matter is a mainly Muslim country's becoming an EU member having a full democracy. If you impose either religion or secularity, then you cannot be democratic. That is why I keep referring to 'democratic secularism.' The majority of Turkey is Muslim and we have to admit this fact. What is important is not this society's religion but whether it complies with the fundamental principles of the EU."

Barroso said democracy is the governance of the majority; nevertheless, both pressure on the majority and the majority's pressure contradict with democratic principles, in an apparent reference to those blaming the ruling AK Party for "imposing the majority's will."

When reminded of the fact that his remarks criticizing the closure case opened against the ruling party have been considered by some as interference in the Turkish judiciary, he said: "The critical point here is whether arrangements concerning the closure of political parties are in line with EU standards or not. Unfortunately, the current arrangements are not in line with EU standards. That is why we have been saying that there is a system error. In addition, democracy is theoretically governance by the majority. Of course, it is not solely this. Respect for minority rights is also essential in democracies. But put yourself in our shoes: You get up one morning and you hear that the most important leaders of a country have been put on trail and the biggest party faces closure. You cannot remain indifferent to this abnormal situation. Democracy is of course not tyranny by the majority, but it is also not governance despite the majority. That is why I am surprised.

"If the majority violates human rights, this is against democracy; however, pressure on the majority is also against democracy. If you impose secularity by force, you are not a democracy anymore. This is a tough test for Turkey, but I am optimistic that this will be overcome. We are not telling the Constitutional Court to make a certain decision. What we are saying is that the decision to be made should be in line with EU standards. We have the right to say so because Turkey is a country seeking membership."

When the issue of certain EU leaders' objection to Turkey's EU membership, particularly that of French President Nicolas Sarkozy, was raised by journalists, Barroso said he was aware of the presence of those who look at Turkey with prejudice.

"The most important point with Turkey's EU bid is a mainly Muslim country's becoming a full member having equal rights via catching full-fledged democratic standards. A realization of this will be the most important event of today's world geopolitics. I'm reiterating the things I said in Parliament. I am not tailoring my words to the venue. Most of the European leaders are of the same opinion as me."

The title of Barroso's speech in Parliament was "Turkey: Master of the Straits, Master of Its Destiny."

"Turkey is a very important country. It is a country which can reach out to the Middle East, the Balkans, the Black Sea and the Caucasus. It is also very important that the process keeps going on even though Sarkozy openly said that he is opposed to Turkey during his electioneering. He knows as well that this is a decision made by a unanimous vote of all member states and that obeying this decision is an obligation. Membership is not guaranteed anyway. At the end of the road, every member will decide on this individually. It should also be noted that Sarkozy is trying to lift references in the French Constitution to referenda to be held each time a new country joins the EU," Barroso said.