Barroso encouraged the Turkish government to make further reforms in order to reach full EU membership, describing it as a common goal for both Brussels and Ankara. 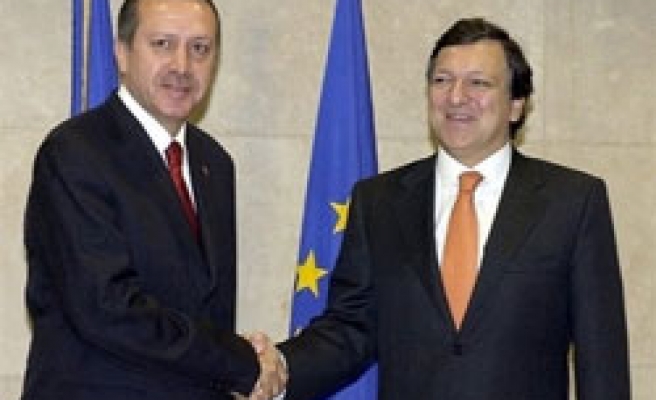 Barroso was speaking at a joint press conference with Prime Minister Recep Tayyip Erdoğan following their meeting at the Prime Ministry. Barroso arrived in Ankara for an official visit along with EU Enlargement Commissioner Olli Rehn.

The landmark visit by the EU officials came amid political turmoil triggered by tensions between the ruling Justice and Development Party (AK Party) and the staunchly secularist and pro-establishment groups on a wide range of issues, including the former's attempt to lift a ban on the headscarf on university campuses. Last month Turkey's Constitutional Court decided to hear a closure case against the AK Party on charges of being a "focal point for anti-secular activities."

In response to a question concerning the closure case, Barroso avoided giving detailed comment -- apparently taking into consideration unfavorable domestic reactions in Turkey to his earlier comments. "I hope the Constitutional Court's decision will be taken on the principle of rule of law in accordance with the European Court of Human Rights' verdicts and the rules of the Venice Commission," he stated. "I will not comment on details. … What I can say is that as Turkey is a candidate country, we cannot be indifferent to developments," he noted.

For his part, Erdoğan said at the press conference that he would not rule out amending the Constitution if the Constitutional Court moves to close his ruling party. "If necessary such a step will be taken, but if it does not prove necessary, the legal process will be followed just as it is [now being followed]," Erdoğan said.

The EU officials' first stop in Ankara before meeting with President Abdullah Gül at the presidential residence, Çankaya Palace, was Anıtkabir, the mausoleum of Mustafa Kemal Atatürk, the founder of the Turkish Republic. Signing the official Anıtkabir memorial book at the Misak-ı Milli (National Pact) Tower, Barroso wrote, "I pay respect to great statesman Kemal Atatürk, who had a great vision, who served his country with determined reforms and who carried the country to modernity." Barroso and Rehn were accompanied by Foreign Minister Ali Babacan during their visit to Anıtkabir.

Despite the fact that the stop at the mausoleum was actually a part of the official visit protocol, certain mass-selling newspapers suggested in their yesterday editions that Barroso and Rehn particularly chose to visit Anıtkabir, assumed to be a symbol of Turkey's secular identity, to give a message to the government concerning the EU's sensitivity on secular principles. Back in 2004, former European Commission President Romano Prodi had also visited Anıtkabir during an official visit to Ankara. Barroso became only the second president of the commission to visit Turkey in 49 years of relations between Ankara and Brussels. His predecessor, Prodi, was the first, arriving on the eve of the EU's historic decision to start accession talks with the country.

Ahead of the visit, sources at the European Commission said the commission was preoccupied with the situation in Turkey and that the court case was not seen merely as a legal action but as an indirect assault on democracy in the country. Brussels has indicated that secularism is important but that the recent decision of the court is not at all in line with the democratic traditions of the European Union. Stressing that Turkey has been a candidate country since 1999 and an acceding country since 2005, the EU has conveyed that Turkey has an obligation to bring its judicial standards in line with EU legislation and practice.

"Turkey demonstrates that a secular democratic republic, with a predominantly Muslim population, well integrated in Europe, offers a powerful alternative to fundamentalist temptations throughout the world as well as being a major asset in promoting dialogue between civilizations and religions," Barroso said later in the day in a speech delivered at Parliament.

"I understand the importance for Turkish society of the current debate on secularism. In various periods of their recent history, EU member states also went through such debates. But each of them found its own internal compromise. I hope Turkey will do the same. Therefore, do not expect the European Commission to take a position and to impose standards on issues such as the headscarf -- because the EU has none. The only crucial principle that it is essential to defend is tolerance for each other's beliefs and opinions -- in this case, the free choice of every woman, whatever her belief or opinion," he told Parliament. "The European Commission is following the latest developments with the utmost attention, as is its obligation within the context of the EU accession process. Turkey needs to devote all its energies to pursuing long-awaited reforms and should not be distracted from this goal. It is essential for Turkey's own development and modernization."

After delivering his speech, Barroso held separate meetings with the leaders of the three opposition parties represented in Parliament -- Deniz Baykal, chairman of the main opposition Republican People's Party; Devlet Bahçeli, head of the Nationalist Movement Party (MHP); and Ahmet Türk, parliamentary group leader of the Democratic Society Party (DTP), which is also facing an ongoing closure case at the Constitutional Court.

Speaking to reporters concerning Barroso's speech at Parliament, Baykal noted that he was pleased with the latter's statements, saying that Barroso didn't make any comments on Turkey's judicial system, in line with his party's expectations.

"This was the appropriate [approach]. It was pleasing that earlier statements made on this issue at various platforms were not carried to the Turkish Parliament," Baykal said, while describing his meeting with Barroso as "balanced and useful."

The EU opened entry talks with Turkey in 2005, but there has been little progress amid disagreements over Cyprus and opposition from France and other EU countries. The government appears to be focusing on EU reforms again after Turkey's top court recently agreed to hear the chief prosecutor's case for shutting down the party and banning Erdoğan, Gül and 69 others from politics for five years.

A flurry of diplomatic activity in Ankara will continue next week with an upcoming visit by Jean-Pierre Jouyet, the French minister of state responsible for European affairs.

The exact date and his contacts here are not set yet, but French Embassy officials here told Today's Zaman on Thursday that his visit aimed at serving as preparation for France's rotating presidency of the EU, which will start on July 1. "The visit is more evidence of our will to keep up dialogue that we have been having on various levels," the same officials said.