Exchanges became so tense that Slovenian Foreign Minister Dimitrij Rupel, chairing the meeting, denied Bakoyanni the floor for another riposte, saying he would have to "close Dora's box", one participant reported. 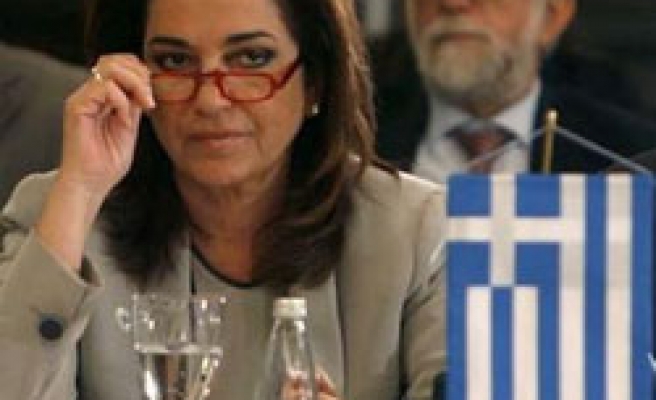 European Union foreign ministers clashed on Monday over whether to offer Macedonia the prospect of opening membership talks this year, with Greece leading opposition to its neighbour's hopes, diplomats said.

In a statement, the ministers regretted "violent incidents and other serious shortcomings" in the conduct of a June 1 general election and urged the government to investigate and act on all reported serious irregularities.

They reaffirmed their commitment to Skopje's "European perspective" but did not mention the start of negotiations with the Balkan candidate country or the conduct of the partial re-run of the election on Sunday.

International monitors said on Monday the re-run was free of violence, but tensions and intimidation meant it still did not meet some key European standards.

"The Council expressed its hope that the new parliament and government will be established soon, enabling the country to achieve rapid and sustainable progress in its further reforms, which are important for its EU integration process," they said.

Diplomats said a clash erupted behind closed doors over a proposal by the Slovenian presidency that this week's EU summit should declare Macedonia can still start accession talks this year if it meets a series of benchmarks.

Greece, which has a long-running dispute with Skopje over the country's name, denounced the state of democracy in the republic and said there could be no question of opening negotiations at this time.

"The issue of the name of the country is still flying like a ghost over the whole discussion," Swedish EU Affairs Minister Cecilia Malmstrom told reporters.

Exchanges became so tense that Slovenian Foreign Minister Dimitrij Rupel, chairing the meeting, denied Bakoyanni the floor for another riposte, saying he would have to "close Dora's box", one participant reported.

The 27 EU leaders will have to thrash out the issue at a summit on Thursday and Friday after ministers failed to agree on consensus wording for the summit statement, diplomats said.

Macedonia re-ran the election on Sunday in mostly ethnic Albanian areas where violence and irregularities marred the original vote. But observers from the Organisation for Security and Cooperation in Europe found more shortcomings in three polling stations where a fresh poll will have to be held.