German Foreign Minister Frank-Walter Steinmeier has invited the prime movers behind an Arab Middle East peace plan to join a meeting of European Union foreign ministers in Brussels on May 14. 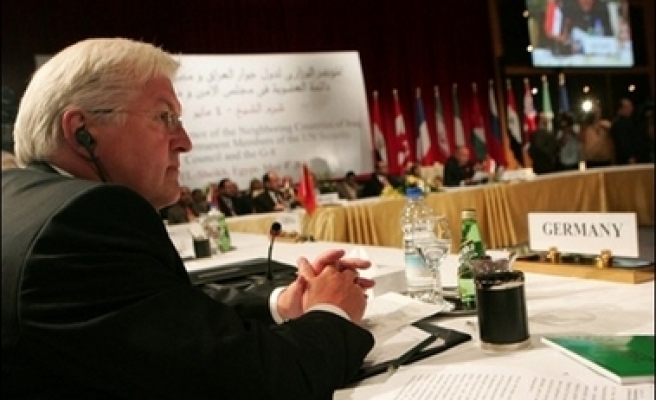 German Foreign Minister Frank-Walter Steinmeier has invited the prime movers behind an Arab Middle East peace plan to join a meeting of European Union foreign ministers in Brussels on May 14.

He made the invite on Friday to foreign ministers from Saudi Arabia, Egypt, Jordan,
Syria and Qatar as well as Arab League chief Amr Mussa during an international conference on Iraq, a source with the German delegation said.

At a March summit in Riyadh, Arab leaders revived a five-year-old peace plan that offers
Israel normal relations if it withdraws from all land seized in the 1967 Middle East war, and allows for the creation of a Palestinian state and the return of Palestinian refugees.

"At the moment there are probably few possibilities for a meeting between (Palestinian) president (Mahmud) Abbas and Prime Minister Olmert," she told reporters.

"But we hope that the situation in Israel will be resolved as soon as possible because it is extremely important to seize this moment."

She said Arab FMs she spoke with had echoed the importance of seizing the moment, describing the Arab peace initiative as "extremely important".

"They say this moment is so important now -- we should not waste any time and that is why I hope they we will manage to create some momentum... The Arabs want peace now -- they are ready for it."

She said Abbas would need the support of his Arab neighbours for any compromises in the name of peace.

Members of the international quartet for Middle East peace, comprised of the EU, the
United Nations, the United States and Russia, were to meet with the Arab foreign ministers here later Friday. Last Mod: 04 Mayıs 2007, 18:28
Add Comment