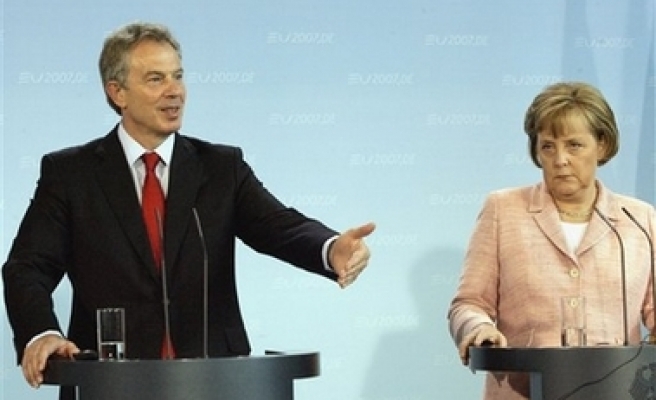 Negotiations were expected to be tough, with Poland and Britain standing firm in their opposition to parts of the proposed treaty, drafted by German Chancellor Angela Merkel, the summit host.

Poland's prime minister was threatening to veto the plan unless his country was given more voting power to compensate for lives lost during World War II. Under the EU's weighted voting proposal, population is key and Prime Minister Jaroslaw Kaczynski argued that his country would be much larger if not for the war.

Warsaw also has renewed its demand that the new treaty include a reference to Europe's Christian heritage — something Merkel is keen not to include.

Merkel, attending pre-summit talks with other conservative leaders, appealed for her counterparts to "work in a spirit that will allow us to reach fair agreements because the EU has to be able to act to solve the many problems in this world."

The EU was thrown into crisis in 2005 when voters in France and the Netherlands rejected its draft constitution, which was designed to streamline decision-making as the bloc absorbed ex-Communist nations from eastern Europe.

Leaders are hoping to reach agreement on what to keep from the old constitution, what to throw out and what needs to be modified. All 27 nations agree that the EU must move quickly to adopt a new rulebook to streamline the complex decision-making system crafted years ago when it was still a union of 15.

But opponents argue that Germany's 11-page plan is a ploy to push ahead with the charter in defiance of the Netherlands and France, where voters firmly rejected the constitution in referendums in 2005.

British Prime Minister Tony Blair, attending his last EU summit before stepping down next week, said he would reject any new treaty that did not meet tough British demands to limit EU powers.

Merkel said guidelines are needed on how to govern the EU so that Europe can deal with pressing issues such as climate change and globalization.

On Tuesday, Merkel presented her counterparts with a list of issues she wants included in negotiations on a new treaty.

Germany and many other states want to salvage as much as they can from the derailed constitution already approved by 18 member nations. They argue that the sensitive compromises within it, which took more than three years of negotiation, is the only way forward.