The European Commission on Wednesday resumed negotiations on a Stabilisation and Association Agreement (SSA) with Serbia, the first step on the road to EU membership. 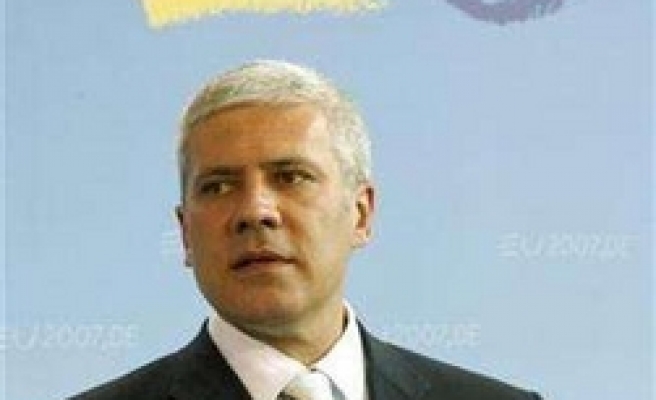 The European Commission on Wednesday resumed negotiations on a Stabilisation and Association Agreement (SSA) with Serbia, the first step on the road to EU membership, some 13 months after it broke these off over Serbia's failure to hand over a top fugitive war crimes indictee to the United Nations' Yugoslav war crimes tribunal in the Hague.

"I am delighted to see Serbia back to the negotiation table. I commend the Serbian government for the actions it has taken to meet the conditions for resuming the talks," said EU Enlargement Commission Olli Rehn in Brussels, where he and Serbian deputy prime minister and chief negotiator Bozidar Djelic resumed the pre-entry talks.

The SAA would bring "concrete trade and economic benefits for Serbia," and form "a key step for Serbia on its path to the EU," Rehn said.

"The resumption of the talks on the SAA was possible owing to the improvements in Serbia's cooperation with the Hague Tribunal," said a European Commission statement.

"The pace and conclusion of negotiations will continue to depend in particular on Serbia's progress in developing its legislative framework and administrative capacity, and full cooperation with the (UN) International Criminal Tribunal for the former Yugoslavia (ICTY), the statement continued.

As well as economic benefits, the SSA will bring Serbia wide-ranging cooperation with the EU in many policy areas such as environment, agriculture, energy and transport, as well help in tackling organised crime and trafficking across borders.

The resumption of pre-entry talks with Serbia follows positive comments last week by chief ICTY prosecutor Carla del Ponte on the country's cooperation with the tribunal in arresting and handing over the handful of remaining fugitive Serbian war crimes indictees.

Del Ponte was in the Serbian capital Belgrade to assess whether the democratic government, formed last month, intended to fully cooperate with the ICTY and arrest the remaining five fugitive war crimes indictees wanted by the Hague tribunal.

The resumption of EU talks depended on Del Ponte's verdict. Just days before her visit, the Serbian authorities arrested former Bosnian Serb general Zdravko Tolimir, which political commentators described as “the best gift” to Del Ponte on the eve of her visit.

The new Serbian government led by prime minister Vojislav Kostunica has pledged the remaining five fugitives, including war time Bosnian Serb leader Radovan Karadzic and his general Ratko Mladic will be located and apprehended. The Hague tribunal has indicted Karadic and Mladic for war crimes and genocide during Bosnia's 1992-1995 civil war.

Serbia started negotiations on an SAA with the EU on 10 October 2005 and large parts of the agreement have already been negotiated, according to the European Commission. Last Mod: 13 Haziran 2007, 15:15
Add Comment