Croatia should be able to conclude negotiations in 2009 to become the next country to join the European Union, European Commission President Jose Manuel Barroso said on Thursday. 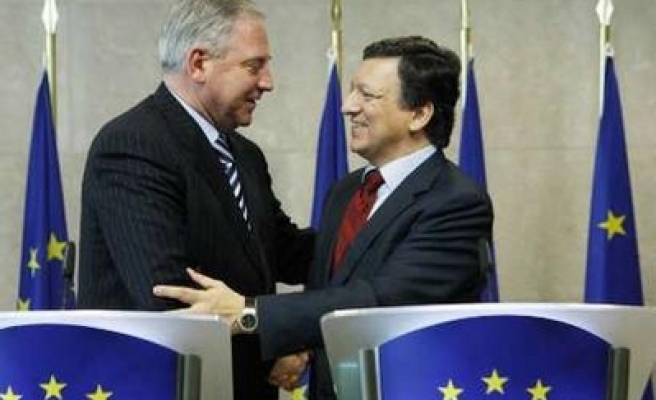 Speaking after talks with Croatian Prime Minister Ivo Sanader, Barroso said the EU executive would give Zagreb an indicative timetable later this year for the steps required to close the accession talks.

"I have every confidence that Croatia should be able to meet the conditions ... It should be possible to conclude the technical negotiations next year, preferably by the end of the mandate of this Commission (in November 2009)," he told a joint news conference.

Barroso said the target date assumed that Croatia would meet all the EU's benchmarks this year, which include a reform of the judiciary and a painful restructuring of its state-assisted shipyards.

Allowing time for ratification by the 27 member states, that would mean Croatia would join the EU in late 2010 or 2011.

The explicit pledge of a target date came after the former Yugoslav republic's parliament voted early on Thursday to allow EU fishermen to enter a protected no-fishing zone reaching into the middle of the Adriatic Sea it imposed on Jan. 1.

"I am very confident that Croatia will be the 28th member of the European Union," Sanader replied. "We are ready to do this work, to master the job in 2008, in order to be able to conclude the negotiation process by Autumn next year."

The Commission announcement was a choreographed political reward for Sanader after he took the political risk of pushing through a divided parliament the suspension of the protected ecological and fisheries zone.

Slovenia, the only former Yugoslav republic to have joined the EU so far, and which holds the bloc's rotating presidency, had threatened to start blocking Croatia's accession talks if the exclusion zone applied to the Slovenian and Italian fleets.

The EU executive was particularly keen to overcome the hurdle with Croatia as it struggles to persuade other Western Balkans countries, especially Serbia and Bosnia, to choose the path of European integration over nationalist policies.

Sanader alluded to that aim in his reply to Barroso, saying: "We want Croatia to be a success story, also a model country for other countries in the region."