EU to extend sanctions on Uzbekistan

European Union foreign ministers discussed whether to extend sanctions against Uzbekistan on Monday, to impose an arms ban and visa restrictions on leading Uzbek officials. 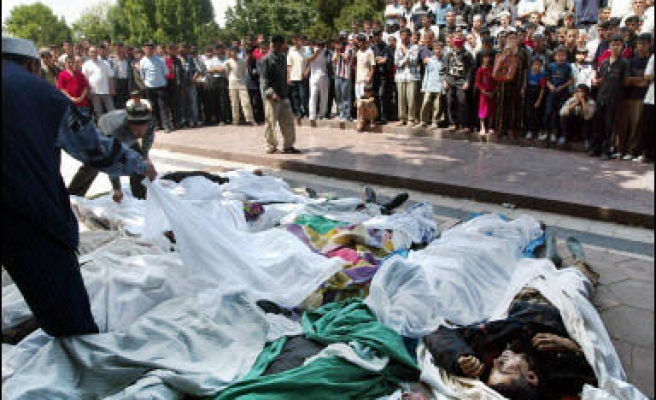 European Union foreign ministers discussed whether to extend sanctions against Uzbekistan on Monday, two years after a bloody crackdown on an uprising prompted the 27-nation bloc to impose an arms ban and visa restrictions on leading Uzbek officials.

All 27 EU nations supported an extension of the sanctions during a debate, but Germany — which holds the rotating EU presidency — and Spain wanted to drop the visa ban on some of the 12 officials on the list, an EU diplomat said.

Britain, on the other hand, harshly criticized Uzbekistan for continuing human rights breaches, the diplomat said on condition of anonymity because of the sensitivity of the issue.

A decision was expected later Monday.

Human rights campaigners expressed concern that EU nations could put economic concerns ahead of human rights when discussing the future of the sanctions on the resource-rich Central Asian nation.

Before Monday's meeting, Human Rights Watch and Amnesty International wrote to EU ministers urging them to maintain a tough line. Human Rights Watch suggested that signs of a softer European stance may have emboldened the Uzbek authorities during the recent trials of rights activists.

"The worsening human rights situation in Uzbekistan is also directly linked to the EU's soft-pedaling," the New York-based campaign group wrote in its letter to the EU.

In March, the EU said it was ready to revive talks with Uzbekistan. It would do so in recognition of President Islam Karimov's increased openness to discuss the May 13, 2005, crackdown on protesters in the city of Andijan.

Karimov has ruled the Central Asian state with an iron fist since before the 1991 Soviet collapse — first as the Communist Party boss and then as president, tolerating no dissent and eliminating opposition.

In December, the Uzbeks agreed to talks with EU experts on the Andijan events but have refused to meet EU demands for an independent investigation into the crackdown, which human rights campaigners blame for the death of hundreds of civilians.

Government troops opened fire on a crowd of peaceful protesters in Andijan, a city in the east of the country, killing at least 700 people, according to rights groups and witnesses. The government insisted 187 died and blamed "Islamic" militants for instigating the violence.

Authorities in the ex-Soviet republic have since stepped up a crackdown on dissent and expelled dozens of foreign-funded civil groups and media outlets. The local media is tightly controlled.