EU to propose ban on imports of seal products

The EU's environment chief Stavros Dimas will propose to ban imports of all seal products resulting from culls where animals suffer, he siad, setting up a possible trade conflict with Canada. 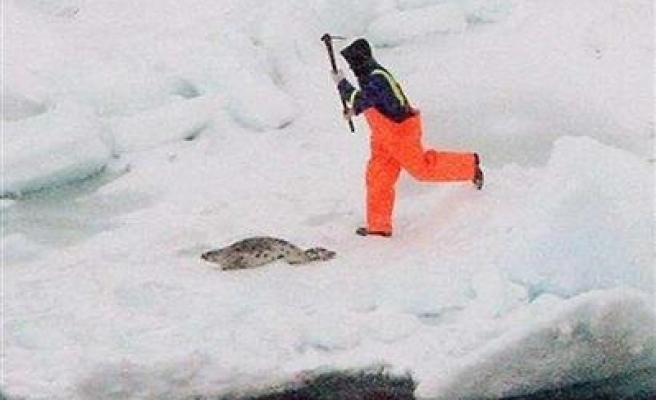 Belgium and the Netherlands last year banned imports of seal products on their own, prompting Canada to launch a trade dispute with the EU as a whole in September. Both bans were the result of concern about cruel hunts.

"We will propose a ban of seal fur imports if (a country) can't prove they were obtained in a humane way," Dimas said late on Saturday on the fringes of an April 11-12 informal meeting of environment ministers in Slovenia.

When asked on the timing of a ban he said -- "It takes some time." The plan would need the backing of the rest of the EU's executive Commission, and would apply to all seal products including furs, skins and health products including vitamins.

Dimas declined to comment on what constituted inhumane killing, saying he personsally disliked any hunting, and instead referred to an EU-commissioned report by the European Food Safety Authority (EFSA) published in December.

The EFSA report recommended that animals were killed quickly, checked that they were dead and bled before skinning, and that monitoring procedures were in place.

At issue is how quickly the animals die, for example whether they end up being skinned alive.

Clubs or metal spikes attached to a wooden handle -- called a hakapik -- are only sure to kill young seals quickly if used correctly, while adults had to be shot, the EFSA report said.

It concluded -- "Many seals can be, and are, killed rapidly and effectively. (But) it is not always carried out effectively and this will lead to seals feeling the skinning."

"I'm very much concerned at the way the hunt is conducted," he said, referring to the cruelty of some trapping practices. Animals can be trapped and drowned underwater, the EFSA said.

Some European Parliament members last month renewed their calls for the EU to act decisively. The largest Canadian cull is of some 275,000 harp seals from mid-March to mid-May.

Dimas complained about Canadian treatment of a European Commission expert team that tried to observe the hunt last year.

"They weren't able to do what they wanted to do. The Canadian local authorities were not very cooperative."

Canada has argued at the World Trade Organisation there is no basis in science or international trade law to justify bans on the import of seal products, which provide an important source of income for many people in eastern Canada.

The EU would ensure that any ban didn't impact traditional hunting by the indigenous Inuit people, Dimas said.

Around 750,000 seals of at least fifteen species are killed and skinned for commercial purposes each year with Canada, Greenland and Namibia accounting for approximately 60 percent of all seals killed in 2006, the EFSA report said.
Last Mod: 14 Nisan 2008, 08:13
Add Comment