The emergency government that Palestinian President Mahmoud Abbas installed after Hamas took control of Gaza, is getting the supporting messages from some anti-Hamas states. 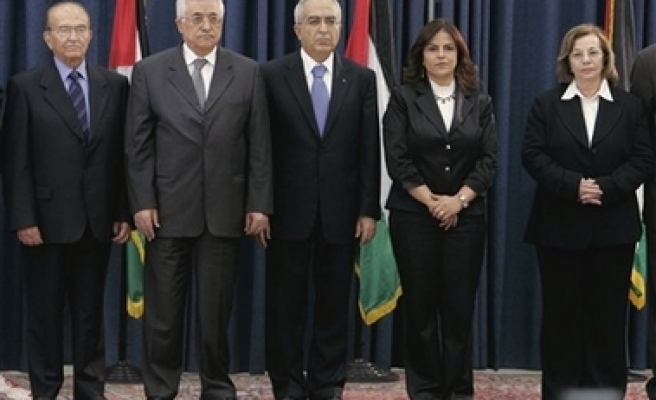 The emergency government that Palestinian President Mahmoud Abbas installed after Hamas took control of Gaza, is getting the supporting messages from some anti-Hamas states.

On Monday, the European Union is promising to restore hundreds of millions of dollars in aid for the emergency government that Palestinian President Mahmoud Abbas installed after Hamas took control of Gaza.

The EU traditionally has been the Palestinian Authority's largest donor, and the reinstatement of aid, cut off after Hamas took power 15 months ago, could signal the beginning of the end to a international boycott.

On Sunday, Abbas hurriedly swore in the new Cabinet, days after dissolving the unity government.

Abbas seeks peace with Israel, whereas Hamas is against the Jewish state's occupation.

The Palestinian Cabinets were holding separate meetings in the West Bank and Gaza on Monday. The dispute has endangered the Palestinians' goal of forming an independent state in the two territories.

The international community has largely been behind Abbas government, led by Prime Minister Salam Fayyad.

EU foreign policy chief Javier Solana announced in Luxembourg on Monday that the 27-nation bloc would resume direct financial aid to the Palestinian Authority now that Hamas is no longer part of the government.

"We absolutely have to back" the new government in the West Bank, said Luxembourg Foreign Minister Jean Asselborn. "The question of today is: How can we help the 1.4 million people in Gaza?"

Riyad al-Malki, the new Palestinian minister of information and justice, welcomed the announcement.

"There are encouraging steps. We hope that these steps will be carried out quickly," he said.

Both the Haniyeh and Fayyad governments profess to represent Palestinians in both the West Bank and Gaza. To drive home that point, al-Malki said the EU aid also would go to pay salaries for government employees in Gaza.

"We will work to secure all basic needs for our people in Gaza," he said before the Cabinet meeting in the West Bank town of Ramallah.

US to lift embargo

The United States, another major donor, has said it will end its financial embargo, while Israel has signaled that it too will ease sanctions on the Palestinians. Israel collects some $55 million a month in customs duties "on behalf of the Palestinians", but has withheld the funds since Hamas took power.

Both Israel and the United States already have said they would work to bolster Abbas, while isolating Hamas.

In New York, Israeli Prime Minister Ehud Olmert said Sunday that his country would be a "genuine partner" of the Abbas-appointed government and promised to consider releasing hundreds of millions of dollars in frozen tax funds.

Meanwhile, Abbas on Monday dissolved the National Security Council in a further bid to weaken Hamas.

The council was formed as part of the governing alliance Hamas and Fatah set up in March, in a bid to divide security responsibilities between the factions.

Israel said it was only letting the staff of international organizations, people with special permission and humanitarian cases to cross. The restrictions have created a chaotic scene at the terminal.
Last Mod: 19 Haziran 2007, 00:05
Add Comment