A last-resort option being considered in EU circles would be introduce some of the envisaged reforms to Brussels voting rules in the accession treaty of Croatia next year, whose entry will swell the ranks of the club to 28. 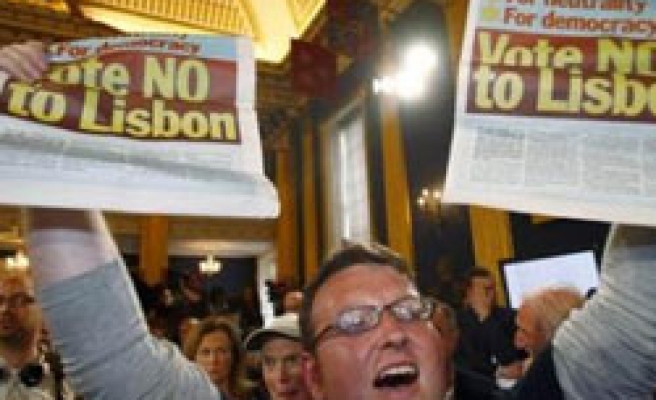 European Union leaders will press Ireland this week for answers on how to overcome its rejection of an EU reform treaty, including whether it will dare to ask its public to vote again.

Foreign ministers will pore over options at a regular meeting in Luxembourg on Monday but the real show-down will come when Prime Minister Brian Cowen meets EU counterparts at a two-day crisis summit in Brussels starting on Thursday.

President Nicolas Sarkozy said at the weekend France and Germany had British backing for their appeal to capitals to pursue ratification of the text, which backers say is vital to give the bloc more economic and diplomatic clout.

As long as Prime Minister Gordon Brown defies domestic calls to suspend ratification, the onus is on Dublin to salvage a treaty already rubber-stamped by 18 of the bloc's 27 states.

"We will be looking to Brian Cowen to indicate whether he thinks there is the possibility of a second vote, and if so, when," said one EU source who stipulated anonymity.

Launched to much fanfare a year ago, the Lisbon Treaty is a densely worded pact which includes many of the reforms proposed by the planned EU constitution, killed off by "No" votes in France and the Netherlands in 2005.

It would allow more decisions in Brussels to be taken by majority rather than unanimity, the current rule that means any one of 27 states can veto policy. It would create the post of an "EU President" and boost the bloc's voice in the world with a foreign policy supremo backed by a dedicated diplomatic corps.

Late on Friday Cowen said he was not "ruling anything in or out or up or down", but officials in Dublin believe a second vote would be a high-risk strategy that could heap yet more humiliation on Ireland and Europe if it failed.

The resounding 53.4 percent Irish vote against the treaty makes it unlikely that it will enter force as planned on Jan. 1 2009, but its supporters remain determined to rescue it.

Talk in Brussels includes the possibility of offering Ireland opt-outs in some areas, or a protocol dealing with Irish concerns such as the right of all countries to retain one EU commissioner in Brussels.

Explicit assurances could even be provided that EU members would not lose their veto in certain sensitive areas, such as taxation. But no one wants to face the prospect a complete renegotiation of the unwieldy text.

A last-resort option being considered in EU circles would be introduce some of the envisaged reforms to Brussels voting rules in the accession treaty of Croatia next year, whose entry will swell the ranks of the club to 28.

"That would at least keep the show on the road," said the EU source, while conceding it would not salvage the main benefits claimed for the treaty, such as more efficient decision-making or a stronger voice for the EU on the world stage.

If no solution is found quickly, there is the growing risk of a noisy blame-game over perceptions that Irish voters are merely the latest electorate to give a clear thumbs-down to an EU seen as elitist and far-removed from everyday concerns.

European Commission President Jose Manuel Barroso appealed on Friday for there to be no hunt for a scapegoat in what some saw as a pre-emptive strike at possible criticism from France, which takes on the rotating EU presidency in two weeks' time.

Luxembourg Prime Minister Jean-Claude Juncker warned at the weekend that some of the most EU-minded states could form their own "Club of the Few" to advance joint EU policy, leaving the laggards behind.