European ships not turn back over Israeli repelling

Speaking from Cyprus last week, Free Gaza spokeswoman Gretta Berlin said that "Why should we turn around? Israel doesn't own that property. We have been invited by the people of Gaza." 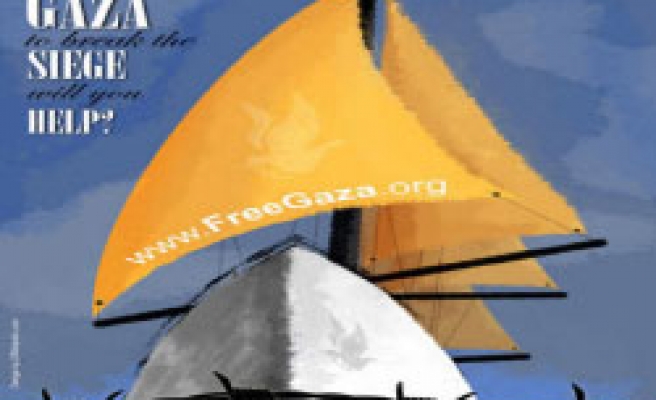 Israeli navy said it will repel Free Gaza Movement's boats organization which is called "Break the siege of Gaza."

Under the organization, the boats to enter Gaza's territorial waters - and, more specifically, the "special security zone" that the Israel Navy has declared off-limits to all boats. According to the information that Free Gaza Movement announced ship will depart Alexandria, pick up at Cyprus and enter Gaza waters.

Reports released Sunday give the first indications as to what the Israeli response to the Free Gaza Ship will be.

Reports claim that Israel is pressuring Cyprus, from where the Free Gaza ship will launch, to halt the voyage. The Israeli Foreign Ministry has also voiced concern over the project, reported Ma'an news agency.

The Free Gaza statement, responding to rumours of the use of force against their vessel, stated:

"We are nonviolent human rights activists and we have vowed to take no violent action, in either word or deed, against any other human beings - including against Israeli government and military officials who, apparently, wish us harm."

Speaking from Cyprus last week, Free Gaza spokeswoman Gretta Berlin said the activists "do not intend to turn around" if confronted by the navy, reported Jerusalem Post.

"Why should we turn around? Israel doesn't own that property. We have been invited by the people of Gaza," she said.

"We'll stand in line, link arms, and tell them they're not wanted," Berlin added.

According to the Israeli Navy, there have been no official instructions given as to how to proceed when the ship is encountered.

In a statement issued Sunday, the Free Gaza movement reminded Israel that the accords expired in 1999. The accords, in fact, were never fully implemented, and are considered by most to have been a failure now defunct.

The movement is prepared to be stopped by the Israeli Navy on their way into Gaza waters. Where the boat is stopped, and the justification given for any Israeli military altercation with the ship, will shed light on the current Israeli mechanisms being used to sustain the Gaza blockade.

The Free Gaza claims to be a Humanitarian vessel bringing needed supplies into the area and has no violent or military intentions. The group has also corresponded with Israeli Minister of Defense Tzipi Livni, among other Israeli officials, and invited them to the welcome ceremony in Gaza.

Lauren Booth, sister in law of former British Prime Minister and current Middle East Quartet Envoy Tony Blair, reported receiving a call at her family home in France. An anonymous caller told her husband "your wife is in great danger. These ships will be blown up."
Last Mod: 19 Ağustos 2008, 12:08
Add Comment