Ex-diplomat: US should engage with Hamas leaders 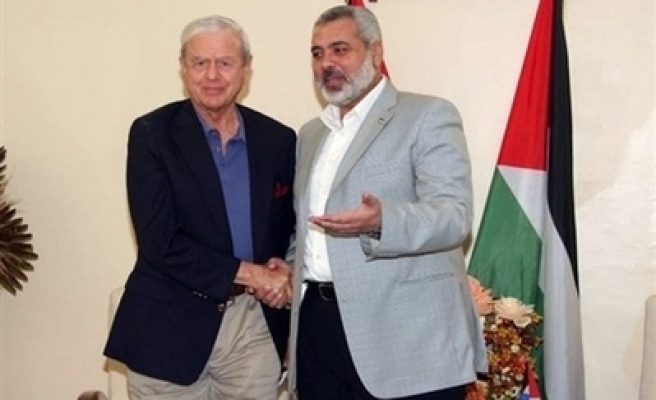 A former senior US diplomat described senior Hamas leader Ismail Haniya as a thoughtful politician, saying the US administration should drop its refusal to engage with the Palestinian movement.

Richard Viets, who was US ambassador to Jordan in the early 1980s, Tuesday recounted his meeting with Haniya in Gaza earlier this month as part of a private US group's fact-finding mission to the region.

"Haniya is a very smart, articulate, sophisticated, thoughtful politician. You have to be impressed sitting in the room with him," Viets told a news conference.

"On the whole his comments regarding Israel I thought were remarkably balanced and non-polemical," Viets said.

US media coverage had failed to convey an accurate picture of Hamas or Haniya's stance, which was more pragmatic than often portrayed, he said.

The United States and the European Union refuse talks with Hamas.

Viets was part of a team that met with officials and activists in Egypt, Lebanon, Israel, Gaza and the West Bank in a tour sponsored by the Council for the National Interest (CNI).

The group's website says it seeks to counter the "over-zealous tactics of Israel's lobby" in the United States.

Former US president Jimmy Carter made a similar tour of the region and met senior Hamas leaders.

Viets and another former US diplomat said Hamas was open to a negotiated compromise to solve the Middle East conflict.

"They're not out to destroy Israel," ex-diplomat Benjamin Tua said, referring to Hamas.

Hamas was ready to stop cross-border rocket attacks, accept Israel within its pre-1967 borders and would honor past agreements if Israel did the same, said Tua, a former member of the US foreign service who served throughout the Middle East.

"Palestinians do not view Israelis or the Jews as enemies," according to a written account of the CNI team's meeting with Haniya a week before Hamas agreed a cease fire with Israel.

"The problem is the occupation," it said, describing Haniya's stance.

US credibility among Palestinians and Arab governments had been undermined because President George W. Bush's approach was seen as biased towards Israel, the team said.

"There was especially much criticism of the administration's perceived abandonment of America's long standing honest broker approach to the Palestinian-Israeli conflict and Arab-Israeli issues in general," Tua said.

The US-sponsored peace initiative launched last year in Annapolis, Maryland was seen by Palestinian and Arab officials as "too little, too late" and that any progress would have to wait until the next US president takes office in January 2009, he said.

Viets said there remained widespread support for a negotiated solution to the Israeli-Palestinian conflict but little faith in the Bush administration's efforts.

"There is, I'm sorry to say, an almost complete absence of trust today as opposed to even a year or two ago in Israel and in US intentions."

Haniya views current talks on the peace roadmap as "leading nowhere" but that Hamas would not stand in the way if any progress emerged, Viets said.