Ex-police: 'You are authorized to kill Muslims'

A former Gujarat police officer said he had received "clear instructions" while in service to target the Muslim community in staged shootouts. 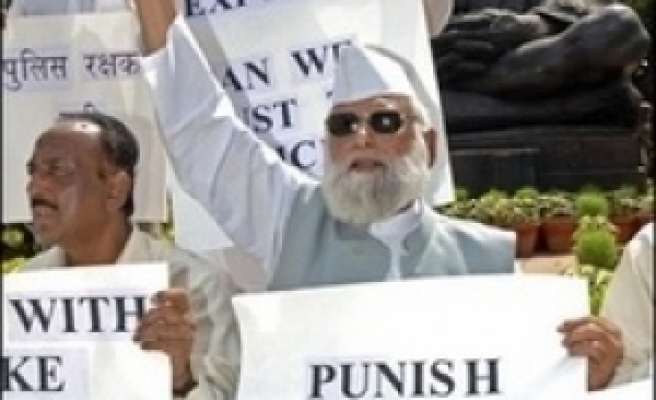 A former Gujarat police officer said he had received "clear instructions" while in service to target the Muslim community in staged shootouts.

The Narendra Modi government in the Indian state of Gujarat has literally carried out organized fake shootouts for killing Muslims, said a former police officer.

He also said that he had received 'clear instructions' while in service to target the Muslim community in staged shootouts but he refused.

“I have been also asked to conduct fake encounters, which I opposed,” R.B. Sreekumar, a former additional director general in charge of the intelligence wing in Gujarat Police said.

He added that former Punjab police chief K.P.S. Gill, who was then security advisor to the Gujarat chief minister, agreed with him and opposed any illegal killings.

Gujarat has been the scene of many 'encounter deaths' - a police euphemism for killings in shootouts, real or faked - since 2002 when the state witnessed one of the most horrifying communal clashes which caused the death of many people mostly Muslims.

The cold-blooded murders were “an attempt to create a sympathy wave in favor of the chief minister whenever his leadership was questioned”, he said.

The police are under political pressure to lead planed shootouts, said Sreekumar in a phone call to IANS from his home in Ahmedabad.

Modi was angered by Sreekumar when he gave statements against him during the trial of the accused in the 2002 communal violence.

His statements came after the arrest of two senior Gujarat Police officers and one from Rajasthan for the cold blooded murder of Sohrabuddin Sheikh, a Muslim man in November 2005, after claiming that he was a planning to assassinate Modi.

Sohrabuddin Sheikh’s wife was also murdered and her body was burnt.

His brother Rubabuddin Sheikh waged a spirited judicial battle for truth, leading the Supreme Court to order an inquiry that uncovered the painful truth.

“They have put the entire blame on the police officers who simply acted at the political leadership's behest. The leadership is trying to wash its hands off,” Sreekumar said.

He also pointed out that Sohrabuddin’s murder was carried out just before the Bharatiya Janata Party's (BJP) national executive in Mumbai in December 2005.

It was thought that the BJP would consider a leadership change in Gujarat in the wake of mounting dissidence in the party unit against Modi.

But once the media announced that there was someone planning to assassinate Modi, the latter gained fresh stature.

Sreekumar said: “The fake encounters have earned 'a respectable status' as a device to prevent crime in the state. People have started accepting the staged killings as a necessity against crime.”

He added that while he was in service, he has been instructed several times to frame senior Muslim officials in government service adding that he was once asked to prepare a report against an Indian Army officer related to a Bollywood actor but he declined, saying that he had nothing to do with the military.

“In Gujarat you will be given all kinds of rewards if you do what the administration asks,” he said. “If you do not fall in line for them, you will be harassed.”