Exiled former Thai prime minister Thaksin Shinawatra urged his stunned supporters on Thursday to accept the dissolution of their party and the political banishment of its leaders which threaten more turmoil. 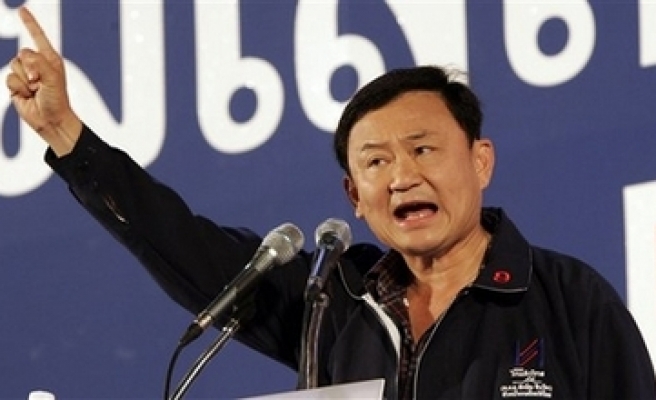 Exiled former Thai prime minister Thaksin Shinawatra urged his stunned supporters on Thursday to accept the dissolution of their party and the political banishment of its leaders which threaten more turmoil.

Thaksin, in a statement read by his lawyer in Bangkok, also pressed the generals who ousted him in a bloodless coup last year to speed up elections promised for December. Analysts say the plan could be derailed by unrest.

"As founder who led the party until the coup, I must apologize to party members, the executive committee and every supporter for an unexpected outcome," Thaksin said.

"I would urge everyone to stay calm and don't make any moves," said the billionaire telecoms tycoon whose Thai Rak Thai (Thais Loves Thais) party was the first in Thai history to win an absolute parliamentary majority.

Hours later, some 600 anti-coup activists with links to Thaksin's old network gathered near Government House to protest the verdicts. About 300 unarmed police watched nearby.

"Democracy Back, Thaksin Come Back," read one banner held by a protester wearing a "CNS Get Out" headband, referring to the name the coup leaders gave themselves, the Council for National Security.

Thaksin's supporters were outraged by Wednesday's shock ruling by the Constitutional Tribunal, which found Thai Rak Thai guilty on two charges of fraud in last year's inconclusive poll, which was later annulled.

There was no immediate violence, but police set up extra checkpoints across the city of 10 million people.