The device might even lead to the development of prosthetic devices including a bionic eye, U.S. scientists said. 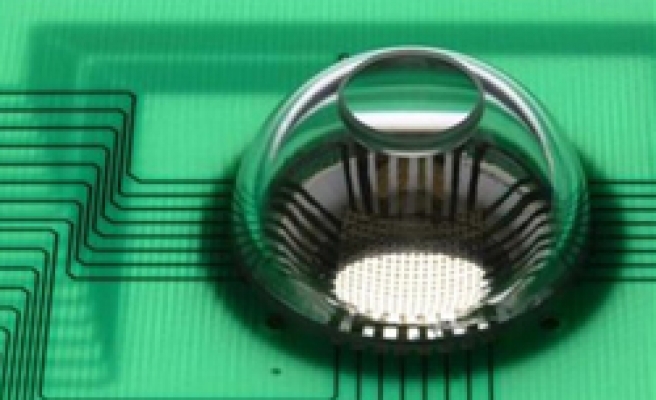 U.S. scientists have built an eye-shaped camera using standard sensor materials and say it could improve the performance of digital cameras and enhance imaging of the human body.

The device might even lead to the development of prosthetic devices including a bionic eye, they said.

"This is the first time we've demonstrated a camera on a curved surface to really make it look like a human eye," said Yonggang Huang of Northwestern University in Evanston, Illinois, who reported his findings on Wednesday in the journal Nature.

Huang, who worked on the project with John Rogers of the University of Illinois at Urbana-Champaign, developed a relatively simple solution to the long-running problem of transferring microelectronic components onto a curved surface without breaking them.

"If you simply bend it, those materials are brittle like a ceramic bowl. They break," Huang said in a telephone interview.

To solve this, Huang and Rogers developed a mesh-like material made up of tiny squares that hold the photodetectors and electronic components. The squares are connected by tiny wires that give each component the ability to mold to a curved surface.

Improving the field of vision

"This approach allows us to put electronics in places where we couldn't before," Rogers said in a statement.

With funding from the National Science Foundation and the U.S. Department of Energy, Huang and Rogers built a digital camera that has the size, shape and layout of a human eye. Huang said the curved shape greatly improves the field of vision, bringing the whole picture into focus.

"Currently when you take photos, the middle part of the picture is very clear but when you go to the edge, it is not so clear," Huang said. "The curved technology will make the entire picture clear."

But the applications extend beyond taking better vacation photos.

"It really extends to all of the electronics that we use on humans. You want to have a curved surface to fit the human body. That is really the place it can be used," he said.

Huang said the device could be used to make better imaging equipment, such as curved sensors to monitor brain activity that follow the contours of the brain. It could even be used in the development of an artificial retina or a bionic eye.

"Right now we've already got a camera working. It works very well with computers. It's just how to connect the camera to the brain. That is the issue to be solved," he said.