A truck bomb aimed at electoral commission headquarters ran into barriers and failed to explode hours before the start of Nigeria's presidential vote, the national police chief said Saturday. 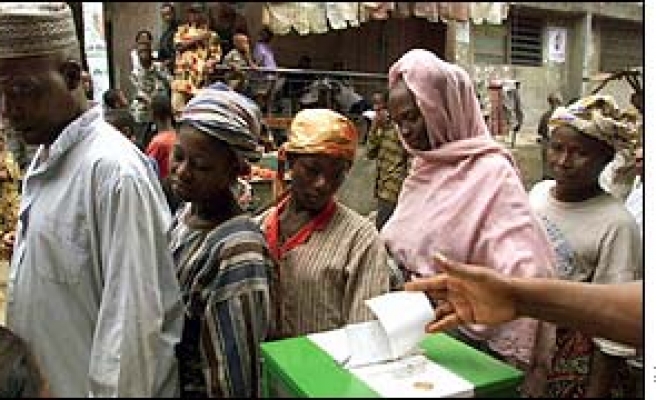 Voting centers opened despite the attack and the last-minute arrival of some of the 65 million ballots. In a lagoon-side slum in the sprawling city of Lagos where fishermen live in stilt houses, voters dropped their tally sheets into clear plastic boxes. Elsewhere, electoral workers were still scrambling to unpack ballots.

Police Inspector General Sunday Ehindero said that the commission attacker pointed the truck loaded with fuel and gas cylinders toward the headquarters and placed a rock on the accelerator before jumping from the vehicle, which was stopped by barriers and a power pole before reaching the building in the capital, Abuja.

"I'm calling on all Nigerians to go about their civil duties ... peacefully," he said.

If successful, Saturday's election will set up a transfer of power between elected civilian leaders for the first time since Nigeria gained independence from Britain in 1960. Other attempts have been overturned by annulments or military coups.

At least 49 people have been killed since chaotic state elections last weekend and many more were reported dead in earlier political violence. The political opposition has rejected results from the April 14 state elections that showed President Olusegun Obasanjo's ruling party clearly winning.

"Nothing should be done to prevent us from achieving this significant political landmark," Obasanjo, who once headed a military regime, said in a national address Friday.

Obasanjo's 1999 election ended 15 years of near-constant military rule, but his 2003 re-election was marked by allegations of massive vote rigging.

Former military leader Gen. Muhammadu Buhari, who lost to Obasanjo in the 2003 vote, is considered one of the three front runners in Saturday's vote, alongside Vice President Atiku Abubakar, who heads an opposition party ticket, and Katsina Governor Umaru Yar'Adua, who inherited Obasanjo's powerful party machinery.

Abubakar fell out with Obasanjo after he opposed a failed attempt by the president's supporters to amend the constitution to allow Obasanjo another elected term.

Abubakar only rejoined the ticket this week after the Supreme Court overruled an electoral commission decision that had barred him from the race on findings of corruption, which the vice president denies.

Some of the ballots adding Abubakar to the list of 25 presidential aspirants were still arriving in country on Friday, only hours ahead of the vote in the nation of 140 million people.

Nigeria's 61 million registered voters are casting their ballots at 120,000 polling centers in the contests for the presidency and more than 300 seats in Nigeria's federal legislature.

The electoral commission said Saturday's voting would be pushed back two hours from the previous weekend, when voters waited for hours before polling booths opened. Polls would be open between 10 a.m. and 5 p.m. (5 a.m. and noon EDT).

The presidential winner must gain the most votes cast nationwide and at least one quarter of ballots cast in 24 of Nigeria's 36 states, a provision designed to ensure the president draws support from around the multiethnic, polyglot nation.

If no winner emerges, a runoff election would be held within one month. A new government will take power on May 29.

Ehindero also said that militants who battled government forces for hours on the eve of the vote in an oil-rich southern state had been seeking to kidnap the governor, who's also the ruling party's vice presidential candidate.

The gunbattle raged for several hours Friday in Yenagoa, the capital of southern Bayelsa state. Ehindero said the gunmen sought to kidnap Goodluck Jonathan, the state governor and vice presidential candidate for the ruling People's Democratic Party, was scheduled to be in his home state to vote on Saturday.

The gunfire ended after about two hours.

Security forces drove off the attackers, a private security official said on condition of anonymity because of company prohibitions on dealing with the media.

Another security official, also speaking on condition of anonymity for the same reason, said three Nigerian workers initially feared kidnapped had been found hiding under the vessel's engine housing.

A military spokesman, Maj. Sagir Musa, confirmed an attack had taken place, but had no details.

More than 150 foreigners have been kidnapped over the past year in the southern region where crude is pumped in Africa's largest producer. Stepped-up violence has trimmed Nigeria's daily production by about one quarter, helping send global crude prices higher.

Ehindero upped an earlier death toll in recent election violence, saying 34 police have died due to "criminal desperation that has attended the conduct of these elections" and that 40 civilians were killed.

He earlier said that 21 people had died on April 14, the day of disputed state elections. Local media reported between 40 and 50 dead that day.