Thousands of farmers in southwest China rioted at a government office after authorities imposed heavy fines on families that had more children than allowed under the country's family planning policy, a newspaper and a villager said Monday. 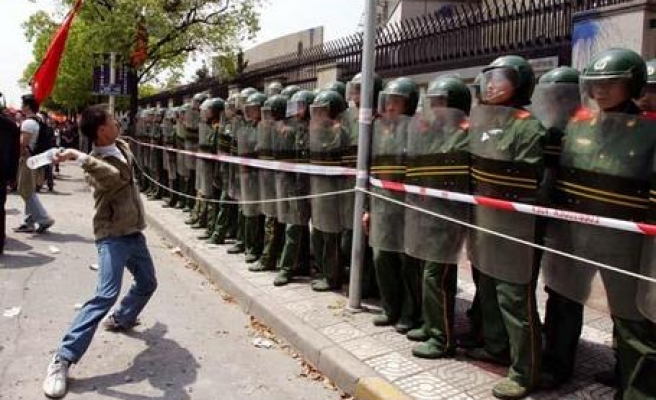 Thousands of farmers in southwest China rioted at a government office after authorities imposed heavy fines on families that had more children than allowed under the country's family planning policy, a newspaper and a villager said Monday.

One person was injured as villagers and government officials hurled stones at each other, the newspaper reported. The demonstrators also knocked down a wall and damaged offices at the building, it said.

Lu Wenhua, a town resident, did not participate in Saturday's demonstration but said he had heard about the riot from other villagers. Lu, 23, said protesters were angry because the government had levied fines of more than $1,300 on families that had too many children.

"The fine is too heavy because the annual income of the villagers was only 1,000 yuan (about $130). It is too much for people to bear," he said in a telephone interview.

It wasn't immediately clear what sparked the riot, how long the fines had been imposed or how many families had been involved. A woman who answered the phone Monday at the Shabi township government said she had no comment and refused to give her name.

China's family planning policy — implemented in the late 1970s — limits most urban couples to one child and families in some rural areas to two in an attempt to control population growth and conserve natural resources.

Critics say China's family planning policy has led to forced abortions, sterilizations and a dangerously imbalanced sex ratio due to a traditional preference for male heirs, which has prompted families to abort female fetuses in hopes of getting boys.

Ming Pao said all public servants had been ordered to collect $65 from people who violated the family planning policy. If violators failed to pay within three days, their homes would be demolished and their belongings seized.

The protest is the latest in a growing number of violent incidents across China in recent years as ordinary Chinese vent anger over official corruption, a growing rich-poor gap and land confiscations.

Photographs of the Guangxi protest posted on a Chinese online forum showed cars and a motorcycle smashed and overturned, and a rioter making off with a computer monitor taken from the office building.