The status of the N Iraqi city of Kirkuk must be solved through a political formula and not a hastily organised referendum that could trigger violence, the U.N. special representative to Iraq said. 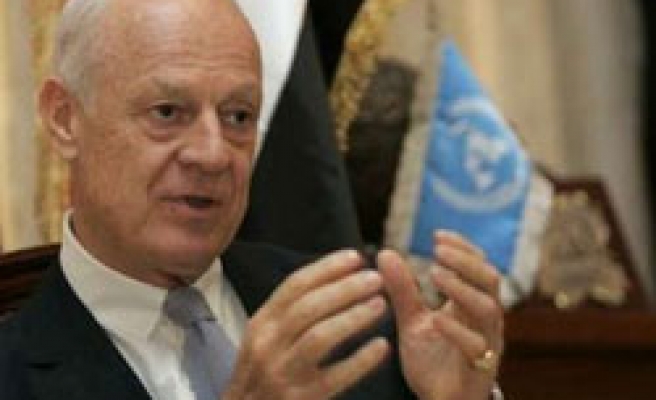 The status of the northern Iraqi city of Kirkuk must be solved through a political formula and not a hastily organised referendum that could trigger violence, the U.N. special representative to Iraq said.

Staffan de Mistura said a peaceful settlement of multi-ethnic Kirkuk's fate -- which he called the "mother of all issues" in Iraq -- would be vital to long-term stability.

Iraq's minority Kurds, who control the northern Kurdistan region, claim Kirkuk as their ancient capital. Arabs encouraged to move there under Saddam Hussein want it to stay under Baghdad.

A referendum had been due by the end of 2007 to decide Kirkuk's status but was delayed for six months, partly to give the United Nations time to come up with proposals for settling the issue. Analysts say a vote on Kirkuk, which sits on one of the world's largest oil fields, could spark a bloodbath.

"Kirkuk needs to be solved through a political formula in which everybody, majorities and minorities, feel comfortable," De Mistura told Reuters in an interview late last week.

"Otherwise, no referendum will be able to solve it and there will only be ongoing conflict and the last thing Iraq needs is a conflict about Kirkuk."

After talks in Brussels last week with NATO and EU officials, De Mistura said the United Nations would suggest a formula by May 15 to resolve conflicts on several disputed areas in Iraq that could serve as a template for Kirkuk.

He said he would propose options so Iraq could decide under which authority to put four disputed locations, which he did not identify. These locations would not include Kirkuk.

Speaking to Reuters in Baghdad, De Mistura said these locations could be greater than four and were near Kirkuk.

He said suggestions for determining administrative responsibility for these disputed areas would hopefully serve as an example for Kirkuk, 250 km (155 miles) north of Baghdad.

As part of any solution, minorities would have to be protected, he said. And a referendum was not the answer until there was a political solution, he added.

The disputed areas have mixed Kurdish and Arab populations.

"Nobody doubts that Kirkuk is a crucial area for Iraq and for the region. It's become also a symbol of what could be national reconciliation or possibly major conflict, even with regional involvement," he said.

De Mistura declined to answer a question on whether the ethnic makeup of Kirkuk was changing, but said the United Nations was trying to get an accurate picture of the population.

The Iraqi government has offered Arab families compensation to return to their original towns. But Arabs and Turkmen accuse Kurds of trying to drive them out of the city.