The FBI enlisted comedians to spruce up its image with US Muslims and Arabs as a part of campaign to recruit agents for a service seriously short of those with Mideast backgrounds. 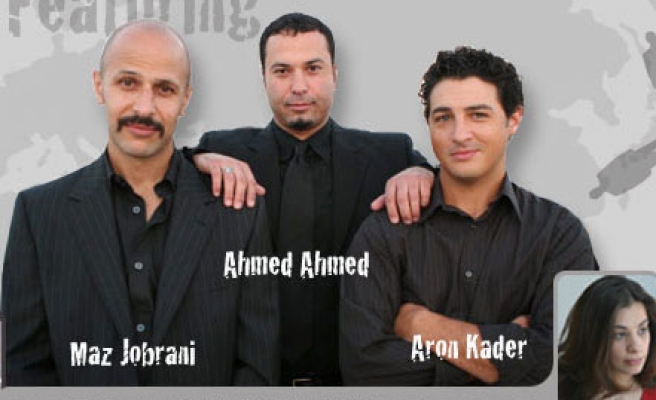 The FBI has enlisted comedians in a drive to spruce up its image with Muslims and Arab-Americans damaged by a wave of arrests and searches since the September 11 attacks in 2001.

'It's so nice to be standing in front of the FBI and not be handcuffed,' quipped Egyptian-American comedian Ahmed Ahmed, one of the performers at an FBI-sponsored comedy show during an American-Arab Anti-Discrimination Committee convention.

'Today's FBI. It's for you,' said posters promoting the law-enforcement agency at the annual event attended by 1,000 people in a ballroom at a Washington, D.C., hotel on Saturday.

Sponsoring the show was also part of a campaign to recruit agents for a service that is seriously short of Muslims and Arab speakers.

Ahmed, who arrived in the United States when he was a month old, said his life is complicated because he shares a name with a wanted man on nine FBI lists.

Ahmed, 37, helped launch the 'Axis of Evil Comedy Tour' which has performed all over the United States and was featured in May on the U.S. Comedy Central cable channel.

Maz Jobrani, an Iranian-American actor and comedian, got thunderous applause when he arrived on stage and turned his digital camera on two tables reserved for FBI officials. 'I just want to take a picture of you,' he said.

Aron Kader, a Palestinian-American comedian, said he had no second thoughts about the FBI sponsorship. 'I hope they tap my phone. I have a lot to say,' Kader told Reuters.

Gwen Hubbard, chief recruiter for the FBI's National Recruiting/Testing Office, which paid $10,000 to sponsor the event, said it was the first time her office had appealed to Arab- and Muslim-Americans in this a way.

'We want to demystify the FBI and show people that we are human, not just cold FBI agents coming out to arrest people,' Hubbard said. She said she hoped to book the comedians for a national conference of FBI recruiters in October.

Anti-Discrimination Committee spokeswoman Laila al-Qatami said the FBI-underwritten comedy show was the highlight of this year's convention. The ADC is the country's largest rights group for Arab-Americans.

'The community saw the irony, saw the inherent joke in it,' she said. The FBI is seeking agents who speak Arabic, understand Muslim culture and can act undercover.

Al-Qatami said having the FBI sponsor the show helped bring the Arab-American community and the FBI a bit closer.

'We thought this would be a fun way for them to be involved in the community, and for the community to view them a little differently. I mean, when you think of the FBI, you don't necessarily think they have a sense of humor,' she said.

Gamal Abdel-Hafiz, an Egyptian-American and the first Muslim FBI agent, encouraged guests to consider FBI careers, adding, 'We will never change what we don't like unless we take part.'

Abdel-Hafiz joined the FBI as a translator in 1994, later becoming a special agent and one of the FBI's prize counterterrorism assets, but he was fired in May 2003 amid allegations that he lied about a 15-year-old insurance fraud.

Abdel-Hafiz fought the firing and won reinstatement to his job and back pay nearly a year later.

He told Reuters that he had asked to speak to the ADC convention because he remained concerned by the lack of Muslims at the agency, which he said still had fewer than 10 Muslim agents out of a total number of over 12,000. Last Mod: 14 Haziran 2007, 13:47
Add Comment