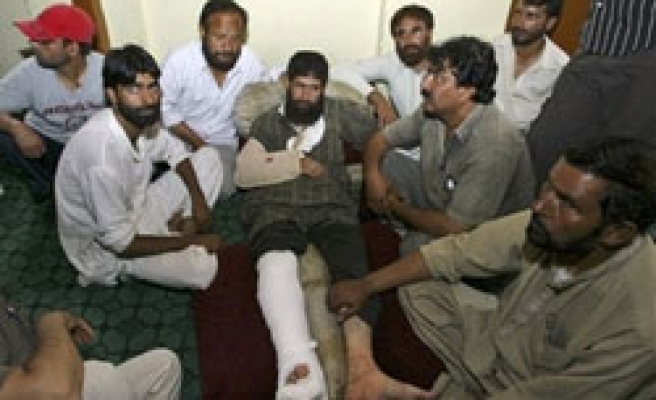 Indian police fired bullets and teargas on Saturday to quell thousands of stone throwing Muslim demonstrators across Kashmir as anger grew over the transfer of forest land to a Hindu shrine trust.

Scores of people including chief of the resistance group Jammu Kashmir Liberation Front (JKLF), Mohammad Yasin Malik, were hurt when protesters clashed with police in the heart of Srinagar, Kashmir's summer capital.

The protests, which have widened to become pro-independence rallies, are some of the biggest since a separatist Muslim insurgency broke out in 1989. Pakistan and India rule Kashmir in parts but both claim the region.

"The present situation reminds me of 1990, it is all disturbing," Omar Abdullah, chief of Kashmir's main opposition, the National Conference party, said.

In the early 1990s, tens of thousands took to streets across the region demanding Kashmir's cessation from India.

The week-long protests started when authorities transferred nearly 100 acres of forest land in Kashmir to Shri Amarnathji Shrine Board (SASB), a Hindu trust, to erect temporary shelters for thousands of Hindu pilgrims who annually trek to a cave shrine in the Kashmir mountain.

Three people have been shot dead by police since protests broke out on Monday. Hundreds have been hurt in clashes.

Indian authorities have denied the charge.

JKLF, which declared a ceasefire in 1994 against Indian troops, is an influential resistance group and says it is fighting for Kashmir's complete freedom both from India and Pakistan.

"Malik was admitted to hospital, he is safe" Mohammad Amin, a police official said.

Shops, businesses, schools and colleges remained closed in Kashmir for the sixth day on Saturday to protest the land move.

"Indians go back, return our land," the protesters shouted.

Tens of thousands of people have been killed in Kashmir in nearly two decades of insurgency.

During the two-month-long pilgrimage, thousands of devout Hindus from across India walk and ride ponies to the cave, situated at an altitude of 3,800 metres (12,700 feet), to pray by an ice stalagmite they believe to be a symbol of Hindu god Lord Shiva.