A fire caused heavy damage to the clipper ship Cutty Sark on Monday, leaving one of London's proudest maritime relics a blackened hulk. 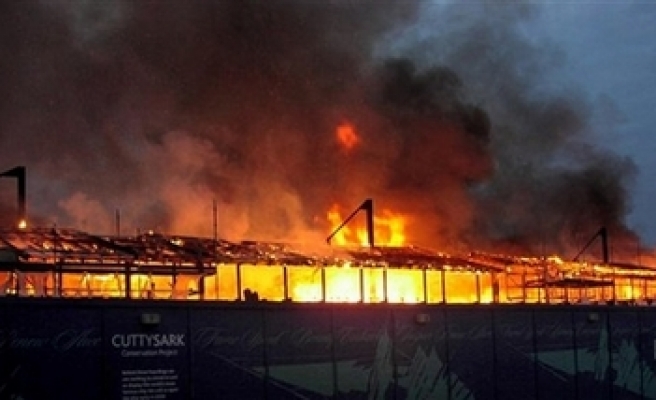 A fire caused heavy damage to the clipper ship Cutty Sark on Monday, leaving one of London's proudest maritime relics a blackened hulk.

Firefighters responded to an alarm at 4:45 a.m. local time at the 19th-century ship's dry dock, where it has been undergoing a $49 million renovation since last year. The fire was out about two hours later and the cause was under investigation.

"We are treating this as a suspicious incident," said police Inspector Bruce Middlemiss, who added that a number of people were known to be in the area at the time the fire started.

Chris Levett, the chairman of Cutty Sark Enterprises, said half of the ship's planking and many historic artifacts had been taken away during the restoration work. He expressed confidence that the vessel could be restored.

"It will be the old ship. The ship has been through many things in its lifetime," Levett told BBC radio.

"This is going to make us even more determined to get this ship back up and running and keep her as original as possible," Levett said.

The ship was the world's only surviving example of an extreme clipper, regarded as the ultimate development of a merchant sail vessel. Most of the original hull had survived since the ship was built for the tea trade of the 1800s.

Cutty Sark left London on its first voyage on Feb. 16, 1870, proceeding around Cape Hope to Shanghai 3 1/2 months later. The ship made only eight voyages to China in the tea trade, as steam ships replaced sail on the high seas.

Measuring 280 feet in length, the ship weighed 979 tons and its main mast soared 152 feet above the main deck.

The ship was used for training naval cadets during World War II, and in 1951 it was moored in London for the Festival of Britain. Shortly afterward, the ship was acquired by the Cutty Sark Society.