Firefighters tackled a ferocious forest fire near California’s Lake Tahoe on Monday that destroyed up to 220 homes and forced the evacuation of 1,000 people, officials said. 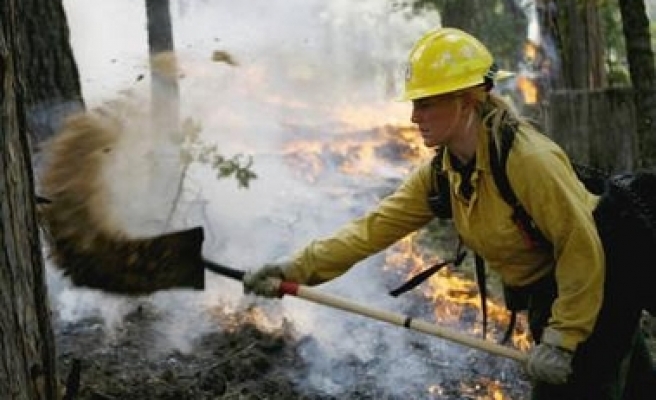 Firefighters tackled a ferocious forest fire near California’s Lake Tahoe on Monday that destroyed up to 220 homes and forced the evacuation of 1,000 people, officials said.

The blaze, which officials said was man-made, erupted Sunday in tinder-dry forest land near the southern tip of Lake Tahoe, a popular tourist destination 304 kilometers (189 miles) northeast of San Francisco.

A US Forest Service spokesman said favourable weather conditions had enabled teams of firefighters backed by water-dropping aircraft to make significant progress, with the fire classified as 40 percent contained.

“Evidently it has been a very good day,” said forest service information officer Todd Chaponot. “The weather helped a lot. The wind dropped off and the humidity increased.”

Chaponot said officials had set a containment date of July 1. Thick smoke across the affected area had gradually cleared Monday, allowing previously grounded firefighting aircraft to take to the skies, he added.

“Initially the visibility was so bad they couldn’t fly,” Chaponot said.

Earlier, California officials declared a state of emergency in the area affected by the fire, which local officials described as the worst in memory.

Between 185 and 225 homes had been destroyed officials said, while around 1,000 people remained evacuated. Homes destroyed were mostly in residential areas, they added. No injuries have been reported in the fire so far.

Forestry service spokeswoman Jackie Faike said the local community had rallied around to help those who had been evacuated or had lost their homes.

“The response from people in the local community has been fantastic,” she said. “We’ve had people ringing to offer housing to evacuees, motels and hotels offering people free accommodation.”

Although it was too soon to establish the precise cause of the inferno, forestry officials said the blaze was most likely started by human activity.

Kevin House, of the El Dorado County Sheriff’s Department, described the blaze as a “monster of a fire.”

House told reporters at a briefing early Monday that the fire was “far and above the biggest disaster that has happened in this community — I don’t know, probably in forever.”

“It’s like a 100-foot wall of flame that’s marching through the forest,” Leona Allen told local media. “It’s thick with smoke. You can’t see your hand. You can’t see anything across the street.

“This is the largest fire we have had in the basin since I was born here in 1960, and this is probably the worst tragedy I have ever experienced in my life,” added Allen, whose own home was devastated in the blaze.

Wildlife officials told local media wild animals had been disoriented by the fire. “Out on the other side of our fence line yesterday, there was a bear looking totally confused,” said Cheryl Millham, executive director of Lake Tahoe Wildlife Care. “He just had nowhere to go.”

US fire and forestry officials have been bracing for a severe fire season across California this year after a dry winter marked by record low rainfalls.

Meanwhile firefighters in Alaska were attempting to rein in a massive blaze that had swept through 21,000 hectares (52,000 acres) and claimed around 70 structures, including holiday homes and lodges, in the remote Caribou Hills, state officials said.