Malaysia's 13th king ascended the throne pledging to reign wisely and safeguard the sanctity of Islam in a ceremony. The queen is the first one with headscarf in Malaysian palace since the declaration of its independence 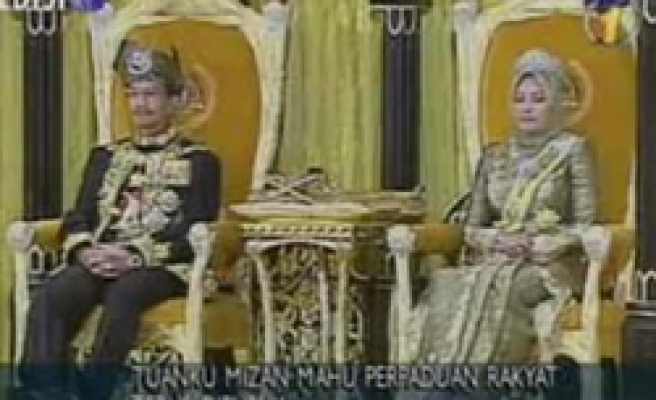 Malaysia's 13th king formally ascended the throne Thursday, pledging to reign wisely and safeguard the sanctity of Islam in a ceremony marked by traditional Malay rites and imperial pageantry.

Sultan Mizan Zainal Abidin, wearing a regal black jacket embroidered in gold thread and a belt buckle decorated with rubies, was installed as the Yang di-Pertuan Agong — the Malay title for the king.

The hourlong ceremony — celebrated with a national holiday for government offices and banks — was punctuated by the blare of trumpets, a 21-gun salute and shouts of "Daulat Tuanku!" — or "Long Live the King!"

Malaysia's system allows each of its hereditary state rulers to take turns reigning as the country's constitutional monarch for five years each.

The role of Mizan — the sultan of Malaysia's oil-and-gas rich northeastern Terengganu state whose royal lineage dates back to the early 18th century — is largely ceremonial, and the power to govern resides with Parliament and the prime minister.

Prime Minister Abdullah Ahmad Badawi stressed that Mizan's installation nevertheless was an assurance of continuity for the country's ethnic Malay Muslim majority, who regard the king as the supreme upholder of Malay tradition and symbolic head of Islam.

Mizan took his oath of office in December, but his investiture was held several months later as is customary.

Currently the youngest of Malaysia's nine state rulers, Mizan succeeded Syed Sirajuddin Syed Putra Jamalullail, the ruler of Perlis state, under the rotation system that was introduced toward the end of British colonial rule in the 1950s. Last Mod: 27 Nisan 2007, 10:35
Add Comment