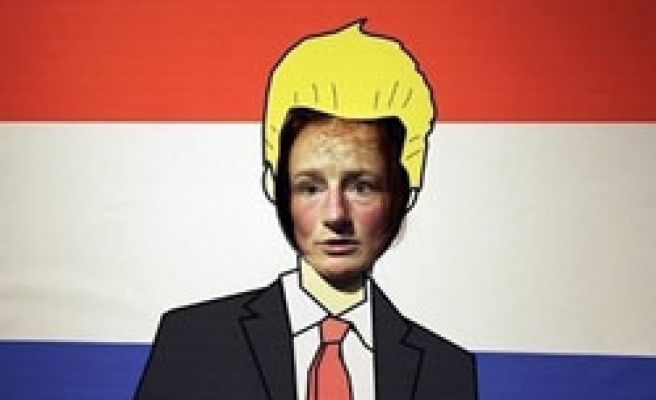 International organizations, religious scholars and concerned politicians warned yesterday that a controversial film made by Dutch politician Geert Wilders might incite a clash of civilizations and further deteriorate already strained relations between the West and the Muslim world.

Turkish religious scholars warned that the movie was an intentional provocation to ignite a new religious clash in Europe using the pretext of freedom of expression.

Dutch Parliament deputy Wilders, known for his anti-immigration stance, released his controversial film about Islam on Thursday over the Internet after TV stations refused to broadcast the film. Wilder's film, "Fitna" -- an Arabic term used to describe "disagreement and division among people" or a "test of faith in times of trial" -- claims Islam's holy text promotes violence and intolerance.

The movie has been on the Dutch government's worry list since the very first day it was mentioned in the Dutch media, on Nov. 27, 2007. The Dutch government has tried its best to distance itself from Wilders and distributed evacuation plans to its consulates and embassies worldwide in case an emergency should arise in light of the forthcoming film, also tightening security measurements around certain military installations abroad.

'FITNA' NEITHER A MOVIE NOR A FILM

At 16 minutes, "Fitna" is neither a movie nor a film. It is rather a kind of slideshow using five verses from three chapters of the Quran with accompanying translations in addition to press and television footage of terrorist acts including the 9/11 attacks, the beheading of Jack Hensley by al-Qaeda terrorists, capital punishment for gay men and adulterous women, female genital mutilation and child abuse. The verses were specifically selected from among verses that can be interpreted as calls for war, anti-Semitism, "Ummah-exclusive-ism" and a conquering ideology when taken out of context.

"Fitna" ends with a call from Wilders to Muslims to "clear their holy book from violent verses" -- which is precisely what 19 Mayıs University Theology Faculty Professor Yavuz Ünal criticizes about the piece.

In a phone interview with media, Today's Ünal said that the verses used in "Fitna" have been cut off from their context within the totality of the Quran and therefore present Islam as a religion promoting violence.

VERSES CUT OFF FROM THE REST OF QURAN

This intentional selection will certainly harm calls for an "Alliance of Civilizations." Supporting Ünal's observations, Ankara University Theology Faculty Professor İlhami Güler said that the verses are not only cut off from the rest of the Quran but also are removed from their historical contexts. "What the producers of this film are doing is exactly what terrorist organizations like al-Qaeda do. They are isolating verses from their contexts and using them for their own political projects," Güler told media.

USING THEIR OWN STANDARDS OF NORMALITY

Güler also criticized the pretext of freedom of speech used for provocative pseudo-artistic productions. "The West regards itself as the center of normality, of ethics, of what is right.

So what is being done in Iraq, in Palestine, in Guantanamo becomes normal and is not questioned. Then they turn to the Muslim world and using their own standards of normality and modernity they perceive this world as abnormal, backward and even wild," Güler said.

According to him, a thorough study of criticism generated in the West about Islam and the occasional violent responses in the Muslim world should concentrate not only on the "correctness" of these acts, but also the reasons for a sense of exclusion present in the Muslim world.

"I have recently watched the footage of American soldiers intentionally targeting a minaret and shooting it down. It is true that there are things that need to be corrected in the Muslim world, but this shouldn't be done through the one-sided perception of the West," he said.

Marmara University Professor Emeritus Saim Yeprem told media yesterday that the film's objective was to cause clashes among civilizations. According to him, Muslims should not be concerned about the work's content, but the mentality of people who produce and encourage such films. Professor Hayri Kırbaşoğlu of Ankara University's Theology Faculty said "Fitna" was a product of not only prejudiced political manipulation, but also of wishful thinking. "They want Muslims to be as they depict them," Kırbaşoğlu claimed.

As for the response of the Muslim world to "Fitna," scholars have stressed that Muslims bear in mind the second meaning of the word and regard this event as a test case that they should pass through patience and educational activities. Yeprem recalled that Islam's prophet never responded in enmity to the kinds of attacks the Muslim world is facing today. "We should be clever and base our struggle on knowledge. Our responses should be acknowledging, not violent. We should convey the correct Islam, and if the film is using the Internet, we should use it [the Internet] for our own means as well," Yeprem said.

ANY SPONTANEOUS RESPONSE WOULD BE PROBLEMATIC

Professor Hayri Kırbaşoğlu of Ankara University said that any kind of spontaneous response to "Fitna" would be problematic. "We should create an umbrella organization in Europe that will coordinate the responses to these kinds of events. And this coordination shouldn't be left to community leaders or mosque imams but to academics who know the language of the country they are living in.

Unfortunately, Turkey does not have religious scholars who can write and publish in foreign languages. Radio or television programs are not on the agenda at all," he complained. He also underlined the necessity of civilian responses organized by NGOs. "We should mobilize governments, the Organization of the Islamic Conference [OIC] -- which is doing nothing other than condemning -- [and] other official organs to act in a constructive way, to financially support academic studies that will present Islam to the West as it should be [presented]," Kırbaşoğlu told media.

The scholars also expressed their sympathy with declarations made by Dutch Prime Minister Jan Peter Balkenende and the European Union, praising the self-restraint of the Dutch Muslim Community as Balkenende did in a Thursday evening speech, and voicing their content with the injunction they brought to a Dutch court. The Slovenian presidency of the European Union warned yesterday that freedom of speech should be exercised in a spirit of respect for religious and other beliefs and convictions.