The heads of state of five former communist-bloc countries said they wanted to diversify their energy supplies and gave their backing to a planned oil pipeline bypassing Russia. 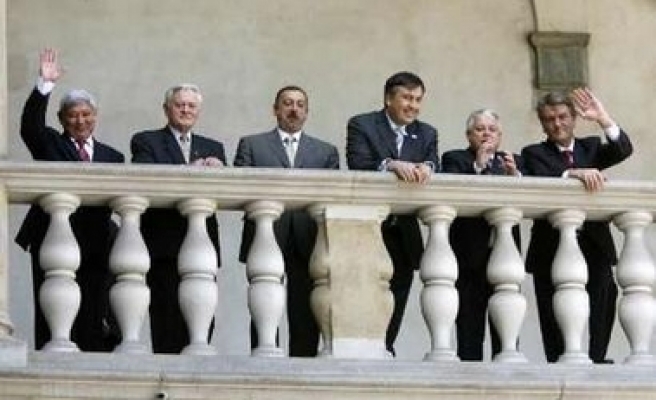 The heads of state of five former communist-bloc countries on Friday said they wanted to diversify their energy supplies and gave their backing to a planned oil pipeline bypassing Russia.

At a summit in Krakow, the presidents of Azerbaijan, Georgia, Lithuania, Ukraine and host nation Poland issued a declaration underlining their support for the extension of an existing pipeline network that channels oil through Ukraine.

The plan is to extend the pipeline to the Polish Baltic Sea port of Gdansk.

Lithuanian President Valdas Adamkus noted that it was the first ever oil pipeline project aiming to link the Caspian and Baltic Seas.

"Today, we are sending the message that the political backing is very strong," said his Azerbaijani counterpart Ilham Aliev.

Georgian President Mikheil Saakashvili said the leaders had achieved their goal of launching efforts to create a new oil supply "corridor" in Europe.

The pipeline, on Ukrainian territory, currently ships Russian oil from the Ukrainian Black Sea port of Odessa to Brody, near Ukraine's western border with Poland.

But Ukrainian President Viktor Yushchenko has backed moves to extend the pipeline to pump oil from Caspian Sea countries such as Azerbaijan -- and potentially Kazakhstan -- through Poland and on to western European markets.

"This project is not directed against anyone," Yuschenko said in Krakow.

"It's a project which opens up new possibilities in the field of energy security," he added.

The pipeline was initially built to reduce Ukraine's dependence on Russia for oil. But when Ukraine failed to clinch the necessary oil supply deals with other countries it grudgingly agreed in 2004 to transport Russian oil through the conduit.

Most former communist countries -- and much of the rest of Europe -- rely heavily on energy imports from Russia, and many are seeking to diversify their suppliers amid fears that Moscow will increasingly exploit its market dominance for political ends.

The presidents agreed to create a consortium to oversee the pipeline project and also decided to set up working groups to improve cooperation between their countries in the energy field.

They also pledged to meet again in October in the Lithuanian capital Vilnius, said Adamkus.

Kazakh President Nursultan Nazarbayev declined an invitation to come to the summit here in order to attend rival energy talks.

Instead, he sent his envoy Lyazzat Kiinov, who signed up to the joint declaration and said he was "pleased" with the initiative.

"Kazakhstan is looking for ways to deliver its oil production to world markets. We are considering getting involved in the Odessa-Brody-Gdansk pipeline," Kiinov said.

However, he said it was "too early" to talk about supply guarantees, saying they would have to go hand in hand with oil purchase deals.

In March, Nazarbayev said that he wanted Moscow to be involved in the project to extend the pipeline.

Nazarbayev is due to meet Saturday with Russian President Vladimir Putin and Turkmen leader Gurbanguly Berdymukhammedov to discuss boosting gas exports along a route from Turkmenistan to Russia via Kazakhstan. Last Mod: 12 Mayıs 2007, 00:54
Add Comment