Britain is set to be hit by more heavy rain following severe floods which claimed the lives of four people. 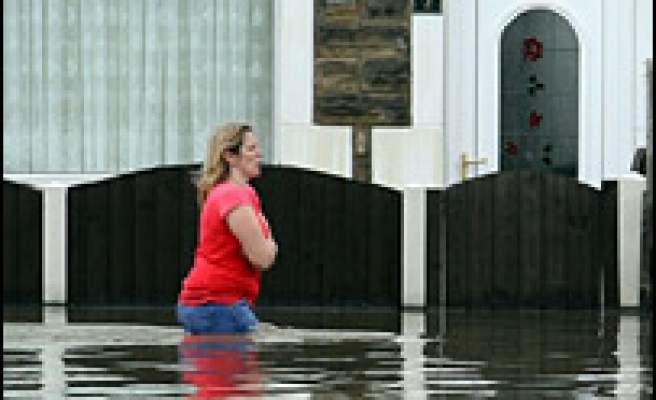 Forecasters say up 50mm of rain could fall in parts of the country on Saturday, and the Met Office has issued an early warning of severe weather.

It comes as more than a thousand people who were evacuated spent their third night away from home.

Fire crews have been working non-stop and have rescued around 3,500 people this week.

The Fire Brigades Union chief has described the rescue effort as the "biggest in peacetime Britain".


More than 350 people have been evacuated from their homes in north Doncaster after the River Don burst its banks, flooding villages, including Bentley

The emergency services are searching for a man missing in flooded locks near Gainsborough, Lincolnshire

The earlier search for a man reported to have fallen into a flooded drainage dyke near Doncaster in South Yorkshire, is thought to have been a false alarm

Rotherham Borough Council says the risk that the Ulley dam could be breached has "significantly reduced".
'Underestimated'

General Secretary Matt Wrack said the fire service had received more than 7,300 calls to flood-related incidents on Monday and Tuesday and warned it was being stretched to the "point of collapse".

He accused the government of underestimating the scale of the flood.

The emergency services are searching for a man who is thought to have gone missing in the flooded Torksey Locks near Gainsborough.

Firefighters are using the Lincolnshire Air Ambulance to look for the man, using thermal imaging equipment. It is believed he fell from a dingy into the water.

Hundreds of families in the worst-hit areas are still unable to return to their homes and thousands are still without power.

However, more rain is predicted.

There is expected to be rainfall of 15-25mm on Saturday, although some places could see 40-50mm.

BBC weather forecaster Jay Wynne said: "Today it's a pretty reasonable day. One or two light showers. There will be some rain overnight.

"The main event is going to be this weekend. There will be plenty of wet, windy weather across the country on Saturday.

"It could be quite nasty. The good thing is it's not going to be a stalled weather front where it's stuck in the same place. This system will be moving through."

This week's floods have been most severe in Yorkshire, Lincolnshire and the Midlands.

The Queen has expressed her shock at the devastation caused by the flooding. She said her thoughts were with people who had lost family, friends and homes.

And Prince Charles intends to visit flood victims on Friday.

A huge operation has been undertaken to pump out water from the reservoir behind the Ulley dam and reinforce the embankment.

The M1 reopened as a result but police warned it could be closed again at short notice if the risk from the dam increased.

About 1,300 people affected by flooding across South Yorkshire spent their third night away from home on Wednesday.

Families from Doncaster, Rotherham and Sheffield slept in refuges including local schools and student residences.

Some residents who live downstream from the Ulley Dam, near Rotherham were told they could return home on Thursday as the risk of a breach subsided.

He said despite the predicted rain he did not think the of the scenes witnessed earlier this week would be repeated.

He said: "The initial concerns about heavy rain are significantly reduced now." One of the flood-related deaths occurred at Hessle, near Hull, when Michael Barnett, 28, got stuck in a drain.

In Sheffield, Peter Harding, 68, died in floodwater after leaving his car.

In a separate incident in the city, 14-year-old Ryan Parry was killed when he was swept away in the River Sheaf at Millhouses.