Surging floodwaters were Monday threatening an Australian city badly hit by violent storms over the weekend, as thousands of people evacuated from towns north of Sydney were allowed to return home. 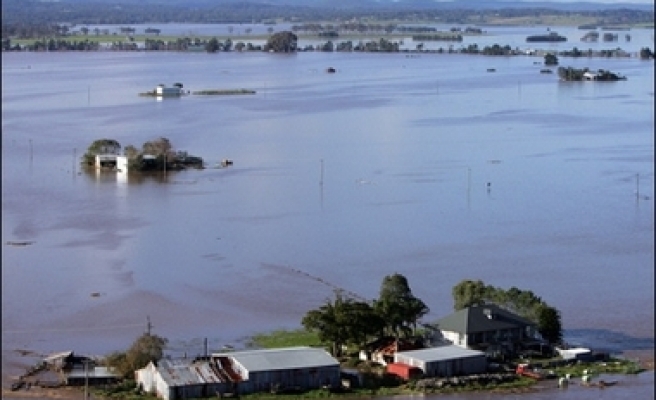 Surging floodwaters were Monday threatening an Australian city badly hit by violent storms over the weekend, as thousands of people evacuated from towns north of Sydney were allowed to return home.

Officials said while the flood danger for the town of Maitland in the Hunter Valley had eased, waters were threatening to inundate suburbs on the outskirts of Newcastle to the east.

As many as 6,000 people were evacuated from their homes on Sunday after deadly storms saw the Hunter River burst its banks in some areas and threaten to breach the levee surrounding central Maitland.

But flood waters rose more slowly than expected overnight and those living inside the levee were allowed to return home early Monday.

“The town is like a ghost town. It’s just really deserted up here at the moment,” Lee Bennett told ABC radio.

New South Wales Emergency Services Minister Nathan Rees said the danger for Maitland was not over, particularly for those 1,000 people who lived outside the levee.

“There was no major overtopping of the main levee system but I do want to stress that there will be extensive flooding in surrounding rural areas and outlying urban villages,” Rees said.

He said the focus would now move to areas closer to Newcastle.

Newcastle was hammered by the storm system, which struck Friday, with a massive freighter washed aground by giant waves and the city centre left looking as if it had been hit by an earthquake.

The storms which lashed Sydney and Newcastle and the Central Coast to the north, left nine people dead, including five people from the same family who died when their car plunged into a swollen creek after the road collapsed beneath them.

Meanwhile, workers were still trying to reconnect some 40,000 homes to the electricity grid, some four days after they were cut off by the storm.

“The poles have literally fallen and in some places washed away, so it’s in some cases a very complicated job.” Last Mod: 11 Haziran 2007, 11:28
Add Comment