In Nepal, at least 20,000 people were displaced and sheltered in relief camps in the country's southeast after a river broke a dam and flooded six villages. 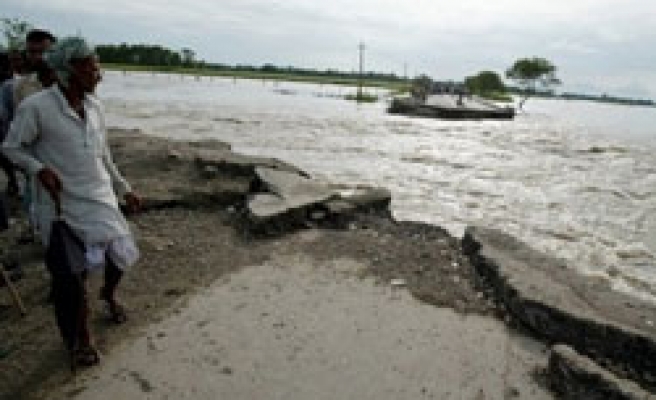 Floods triggered by heavy monsoon rains left some 50,000 people homeless in India's remote northeast, officials said on Wednesday, warning of more rains in one of the country's most flood-prone regions.

Floodwaters swamped some 100 villages in Assam state, destroying homes and croplands and forcing thousands of people to the safety of high grounds.
Officials set up temporary shelters for the homeless in school and government buildings, and used wooden boats to rescue those marooned. Many camped on highways under plastic sheets with what little they had salvaged of their belongings.

"Water levels of all rivers are rising and hundred villages have been completely submerged," said P. C. Deka, an official at the worst-hit Majuli, a riverine island in Assam's Jorhat district. "Around 50,000 people are badly affected so far."

The regional weather office warned of more showers in the next 24 hours in the region.

In Nepal, at least 20,000 people were displaced and sheltered in relief camps in the country's southeast after a river broke a dam and flooded six villages, an official said on Wednesday.

Local media reports said three people were killed but an official said he had no information about the deaths.

Television channels showed video clips of people wading waist-deep water to higher ground, carrying babies in their arms and balancing their belongings on their heads.

Nepal's new Maoist Prime Minister Prachanda is scheduled to tour the affected areas on Wednesday, official said. He has already announced $300,000 as immediate relief to the flood victims.

Floods and landslides are common in mountainous Nepal during the annual monsoon season that normally begins in June and continues through September. About 50 people have died since the rains started this year.

In India, more than 200 people have been killed in rains in the past month, some 30 of them in Assam and the northeast. Most of deaths were due to houses collapsing or by drowning. Some people were killed in landslide.

Assam accounts for about 55 percent of India's tea production and also produces oil. Officials said the rains had not affected tea trade or oil exploration.

The monsoon usually hits India on June 1 and retreats in September, and is key to irrigating some 60 percent of farm land. But it leaves in its wake massive destruction, killing hundreds of people, destroying homes, crops, roads and bridges every year.