Floods kill 13 in Ukraine, 4 in Romania 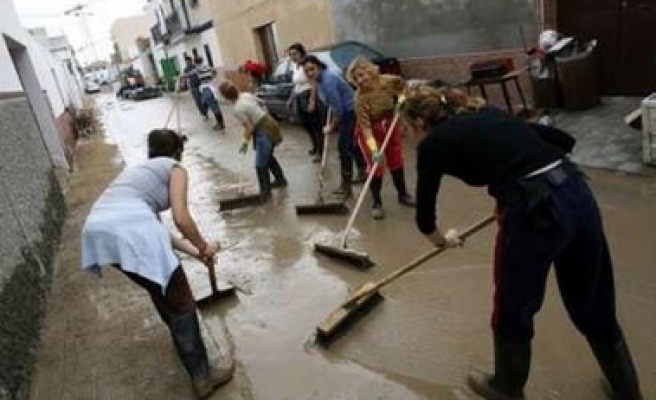 Floods described by a senior government official as the worst in a century have killed 13 people in western Ukraine and four in neighbouring Romania, officials said on Sunday.

Ukraine's Emergencies Ministry said water levels were dangerously high on the Prut and Dnestr rivers after five days of non-stop rain. More than 20,000 homes have been flooded and 7,000 people evacuated, many by boat or helicopter, it said.

At least five of the dead were children and two had been struck by lightning, the ministry said. Two people were missing.

"The situation is very difficult. Ukraine has seen nothing like this for 100 years," Ukrainian media quoted First Deputy Chairman Oleksander Turchynov as saying from the region. He said more funds would be needed in the 2008 budget to repair damage.

President Viktor Yushchenko flew to the worst affected area in the Ivano-Frankivsk region after leaving early a service in Kiev marking the 1,020th anniversary of the adoption of Orthodox Christianity in the region.

Prime Minister Yulia Tymoshenko was also touring the region, where three-quarters of the crops had been destroyed.

In Romania, a child drowned and three people were killed when a house collapsed into swirling flood water in northeastern Maramures county. Two people were missing. About 9,000 people from 200 villages were evacuated as rain damaged over 2,000 houses and 19,000 hectares of farmland.

Authorities deployed 3,000 police and troops to pack dams with sandbags as swollen waters from Ukraine were expected to hit Romania again later in the day.

"We have two critical situations, on the rivers Siret and Prut," Prime Minister Calin Tariceanu said.

"So you understand the gravity of the situation, water levels on the river Prut next to the borders with Ukraine and Moldova are higher than on the Danube."

Rain was forecast in both countries later in the day.