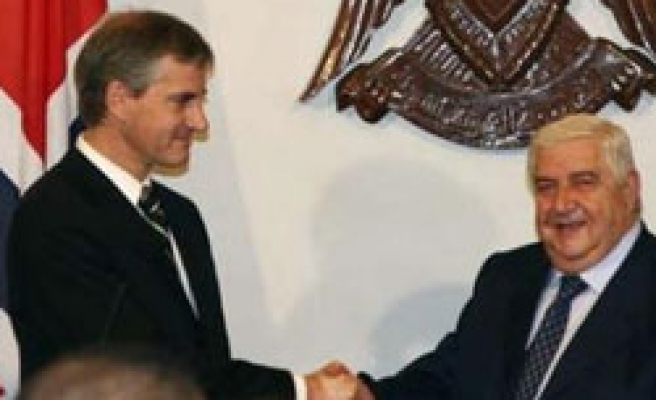 Syria's foreign minister said on Monday he wished his country could match Israel's atomic arsenal, but denied U.S. allegations that it had been building a secret nuclear reactor at a site bombed by Israel last year.

"Syria would not have allowed the inspectors in if it had such a secret (nuclear) programme," Moualem told reporters after meeting his Norwegian counterpart, Jonas Gahr Stoere.

"As a private citizen, I wish Syria had this programme quite simply because Israel has made huge advances in its manufacturing of nuclear bombs," the foreign minister said.

Syria has accused the United States of helping Israel conduct the Sept. 6 raid that Washington said destroyed a reactor built with the help of North Korea. Syria said the site was a normal military complex. Israeli officials have kept quiet on the nature of the target.

Unlike Syria, Israel has not signed the Non-Proliferation Treaty. It is widely believed to have the only nuclear arsenal in the Middle East, developed over decades with Western help.

Investigators from the International Atomic Energy Agency (IAEA) said after a four-day visit to Syria last week that they had examined the bombed site, but that more checks were needed.

Chief inspector Olli Heinonen said the inquiry was off to a good start, with Syria's cooperation satisfactory so far.

Syria said it was not hiding anything from U.N. inspectors and urged the world community to hold Israel accountable for what it described as a massive Israeli nuclear arms programme.

The IAEA sent Heinonen's team after receiving U.S. photos of the al-Kibar site that prompted the U.N. nuclear watchdog to put Syria on its proliferation watch list in April.

The IAEA inspectorate is expected to report its findings in Syria to the agency's board of governors before its next meeting in September.