For or against EU, US? The parties decide

In the run up to the general elections scheduled for July 22, the political parties have clarified their positions regarding Turkey’s relationship with the EU and the US, a matter set to be one of the hotly debated topics in the lead-up to the polls. 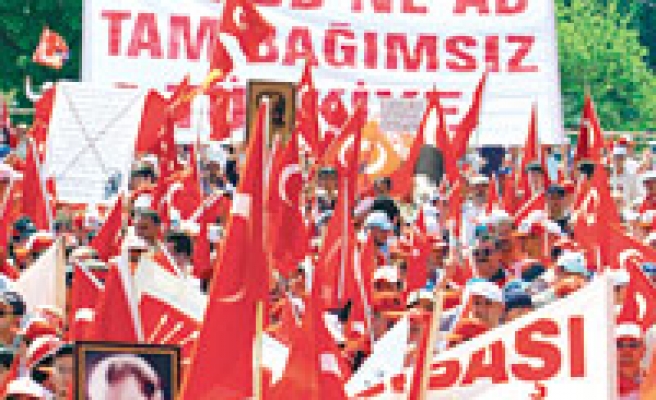 In the run up to the general elections scheduled for July 22, the political parties have clarified their positions regarding Turkey’s relationship with the EU and the US, a matter set to be one of the hotly debated topics in the lead-up to the polls.

"Severing ties with the EU and the US wouldn’t be the right thing to do,” says Justice and Development Party (AK Party) deputy Chairman Saban Disli, while Republican People’s Party (CHP) Deputy Chairman Onur Oymen argues that the relationship “should be reviewed." Nationalist Movement Party (MHP) Deputy Chairman Cihan Pacacı goes even further to challenge the EU, "If we can’t find an equal and fair environment for negotiations, we will suspend the negotiations.” On the other hand Mehmet Agar, leader of the Democrat Party (DP) -- formerly the True Path Party (DYP) -- says that Turkey’s EU bid must continue. However his partner, Erkan Mumcu, the leader of the Motherland Party (ANAVATAN) -- which will merge with the DP -- has expressed dissatisfaction with the current negotiations and suggested a review of Turkey’s strategy.

The AK Party’s relations with the US and the EU are passing through one of their coldest periods ever. Each effort from the AK Party to reconfirm relations with the US is obstructed by the presence of the Kurdistan Workers’ Party (PKK) in northern Iraq. An insistence on a cross-border military operation into northern Iraq has increased tension in relations between the ruling party and Turkey’s NATO ally the US. Moreover the AK Party was disappointed with the Bush administration’s failure to issue a strongly worded statement in response to the "e-memorandum" -- the recent military criticism of the elected government posted on the General Staff Web site.

Although the removal of retired Gen. Edip Baser, Turkey’s special envoy for countering the PKK, from office has served to ease the relationship, the current northern Iraq issue may also further strain the party’s already tense relations with the Turkish military. The AK Party is intent on strengthening relations with the US, but the greatest roadblock remains the PKK issue. In addition, the Greater Middle East Project, advocated by the US, is another key test for the AK Party.

The AK Party has managed to avert a train crash in relations with the EU, but these remain in a far from good condition. The Cyprus issue, the presence of the PKK in Europe, a lack of sincerity on the part of the EU member states and the recent increase in the number of EU countries opposing Turkey’s membership bid are the biggest stumbling blocks for the AK Party. For this reason the party has decided to pursue the “parallel negotiations” method, even if ties with the EU are severed. It seems likely that the AK Party will place greater emphasis on the EU process especially in light of the recent e-memo crisis; the party was particularly pleased with the EU’s harsh reaction to the memo.

Disli: We want a more sincere EU and US

"Severing ties with the EU and the US wouldn’t be the right thing to do,” says Disli, who is responsible for the AK Party’s foreign affairs. “We just want proper and sincere relations. We want the EU and US to understand us and take note of our positive intentions and the warnings. I don’t think those parties that are promising to severe ties with the EU and US will really follow through what they say as this wouldn’t be compatible with the realities of the world today,” he says.

Disli asserts that some quarters are trying to give the impression that the AK Party’s -- and therefore Turkey’s -- ties with the EU and the US have already been cut, which is not the case. “It does not matter whether the EU accepts us or not as we will take the process to the end. We intend to implement EU standards in every field by conducting negotiations unilaterally. In the end we may ask the Turkish nation if they want to joint the EU or not. We have not severed our relations with the US. But Turkey has entered into an election atmosphere and therefore has become more self-absorbed. The US didn’t take the steps we expected them to take. You cannot always expect full cooperation from the US. You can have differences of opinion. But this can’t do any harm to the long standing Turkish-American relationship. We expect the US to take us and our warnings seriously. However the US, too, is under strain from international and regional balances,” he says.

The CHP and the MHP hold the opposite view to the AK Party. The CHP’s foreign policy position can be best summarized with the infamous slogan of the recent republic rallies: “Neither the USA, nor the EU, but a fully independent Turkey.” The CHP’s foreign policy is decided by Öymen and Sükrü Elekdag, who strongly argue for a decisive shift in Turkey’s relations with the EU and the US. It seems that the alliance with the Democratic Left Party (DSP) will further this aim, with Rahsan Ecevit, the founding chairwoman of the DSP, repeatedly delivering statements along the same lines regarding the foreign policy that a CHP-DSP government would follow.

The MHP’s foreign policy perspective is similar to that of the CHP, an effect which may be attributed to the rising nationalist sentiments. “We say ‘no to the EU’, but we are not against the EU,” says Mehmet Sandır, the deputy chairman of the MHP. This statement is sufficient to reveal the contradiction in the MHP’s stance towards the EU. Although the MHP advocates that Turkey’s EU bid should not be stopped, since it initially supported the process when it was a partner in the previous coalition government, it now appears that it regrets that support. The EU’s attitude towards the PKK is sufficient for the MHP to grow bitter about the union. The MHP goes even further to assert that the Turkish-EU relations must be frozen until the EU’s perspective on Turkey changes.

The MHP’s position on foreign policy is largely shaped by former Ambassador Deniz Bölükbaşı, who led the Turkish delegation through tough negotiations with the US over military cooperation on the war in Iraq -- Parliament ultimately voted not to allow the US to open a northern front in the Iraq War from Turkey, denting the hitherto robust US-Turkey relations.

After running for parliament on an MHP candidate list, Bölükbaşı started to make statements about the “ill intentions” of the US. These remarks give strong clues about how the MHP perceives the US. The party advocates that Turkey must undertake a military operation into northern Iraq, even if this means conflict with its NATO ally.

Pacacı: We may suspend negotiations

Pacacı summarizes the MHP’s position on the EU as follows: “The EU is the state policy. Every party which assumes government must maintain this state policy. However we as the MHP intend to maintain the negotiations on equal and fair terms. This has not been done to date. Special conditions not required for other countries have been introduced just for our country. It follows that their intention is not to make us a full member. We have always defended membership without losing our self-respect. Today many groups have come to agree with us. We can survive without the US. We must join the EU, but with equal conditions. If we can’t find an equal and fair environment for negotiations, we will suspend the process. We cannot get anywhere by making concessions.”

The DP does not have a clear, well-defined strategy about Turkish-EU and Turkish-US relations. Mumcu says that the relationship with the EU must be maintained at all costs, while Agar accuses the EU of employing double standards toward Turkey and says that no further concessions should be given to the EU. In this respect the DP’s strategy lies between that of the CHP and the AK Party. The DP urges for a military operation into northern Iraq.

The Grand Unity Party (BBP) and the Felicity Party (SP) argue that relations with the EU and the US should be reviewed and if necessary, suspended.