Just before the truce went into effect an Israeli missile strike killed one Palestinian fighter and wounded another near the border fence with Israel in the central part of the Gaza Strip, medical workers and fighters said. 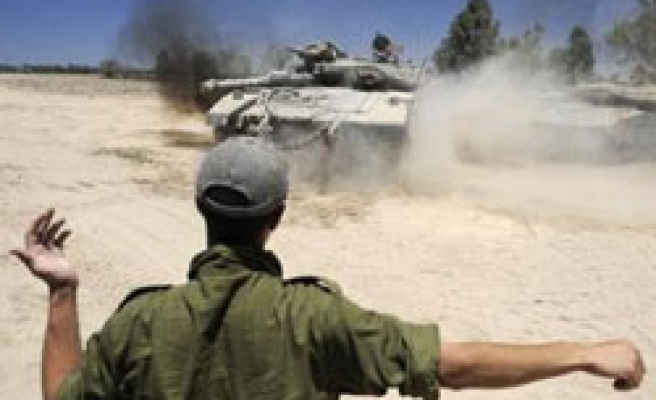 Israel and Hamas halted fighting in the Gaza Strip on Thursday but, with peace prospects dim, both sides voiced doubt over how long the Egyptian-brokered cease-fire might hold.

Just before the truce went into effect an Israeli missile strike killed one Palestinian fighter and wounded another near the border fence with Israel in the central part of the Gaza Strip, medical workers and fighters said.

"What they are calling a 'calm' is fragile and likely to be short-lived," Israeli Prime Minister Ehud Olmert said in a speech near Tel Aviv, using a loose term both the Jewish state and Islamist Hamas prefer in the absence of a formal pact.

But Hamas's Izz El-Deen al-Qassam Brigade, the Islamist group's armed wing, said in a statement issued as the truce went into effect, that the ceasefire was "not in anyway a free gift," to Israel and warned against any violations by the Jewish state.

"Qassam Brigades is fully ready to launch a military strike that would shake the Zionist entity if they did not abide by all the items of the calm deal and the Zionist enemy would be responsible for any foolish act they may commit," the statement said.

Western officials said Israel planned to allow in a slightly higher number of truckloads of goods starting on Sunday, provided the truce was still in place. The Palestinians have demand the full flow of imports restored.

Hamas rules Gaza but smaller Palestinian armed groups have in the past defied its ceasefire calls. The most recent Gaza truce, in November 2006, broke down quickly.

Hamas leader Ismail Haniyeh voiced confidence all factions would respect Thursday's deal out of a sense of national responsibility.

On an unusually conciliatory note, Haniyeh told reporters the truce could offer comfort to Israelis.

"We have no illusions that the Occupation (Israel) has good intentions toward our people, and should the Occupation foil the calm, it would mean a return to an even stronger resistance," said Abu Ubaida, spokesman for the faction's armed wing.

The truce does not cover the occupied West Bank, where Abbas holds sway and where Israeli troops regularly attack. Bloodshed there could potentially trigger reprisals from Gaza.

Another variable is ongoing talks, mediated by Cairo, on the return of an Israeli soldier held in Gaza for almost two years.

Israeli officials said the reopening of the Rafah border crossing between Gaza and Egypt depended on a deal to free Sergeant Gilad Shalit.

Another Hamas leader, Khaled Meshaal, said Shalit's release depended on Israel freeing Palestinian prisoners, though the Olmert government has opposed many of the names on the list.