France began voting on Sunday in a presidential run-off ballot pitting the right-wing son of an Hungarian immigrant against a Socialist bidding to become France's first woman president. 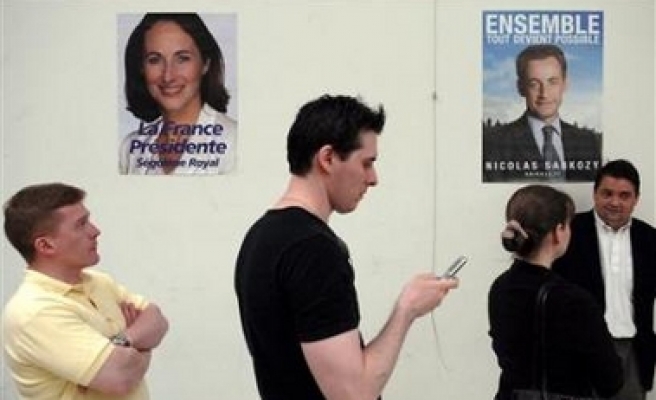 France began voting on Sunday in a presidential run-off ballot pitting the right-wing son of an Hungarian immigrant against a Socialist bidding to become France's first woman president.

Former interior minister Nicolas Sarkozy was favorite to win after opinion surveys conducted on the eve of polling gave him a commanding 10-point lead over Segolene Royal, a regional leader and former schools minister.

Voter stations in mainland France opened across the country at 8:00 a.m. (0600 GMT), but about 1 million citizens in France's overseas territories and French residents in the Americas voted on Saturday in a move to encourage voter participation.

In total, 44.5 million French voters were eligible to cast their ballot. Opinion polls giving an initial indication of the result are expected to be released straight after voting ends at 8:00 p.m.

Sunday's vote is the culmination of a fierce campaign in which Royal warned her opponent would be a "dangerous choice" whose election could spark suburban riots.

The pair have offered contrasting visions of France, Royal combining left-wing economic policies and consensual approach to social affairs in a "change without brutality" reform package.

He topped the first round vote on April 22 with 31.2 percent of the ballot against 25.9 percent for Royal. Turnout was almost a record at 84.5 percent.

While Royal refused to concede defeat on the last day of campaigning ahead of Saturday's "day of reflection," aides acknowledged she had a mountain to climb and many were already thinking about the Socialists' future should she lose.

"The Socialists are preparing to refashion themselves after May 6," the left-leaning Liberation daily said on Saturday, noting that Royal had opened the door to a new era of alliances with her assiduous courting of centrist voters.

Royal, 53, a relatively unknown figure, defied veteran leaders of her party to capture the presidential nomination last November on the back of polls showing she was best placed to beat Sarkozy.

Her calls for boot camps for young offenders and measured criticism of some hallowed party policies proved popular but a gaffe-strewn debut to her campaign underscored doubts about her competence to lead a major economy and nuclear power.

Sarkozy, 52, has worried moderates with his outspoken comments on crime and tough response to 2005 suburban riots, but has won new converts with his focus on traditional values, his reform plans and demand that he be judged by results. Last Mod: 06 Mayıs 2007, 11:13
Add Comment