Aides close to Defence Minister Herve Morin said negotiations with Britain were well-advanced on creating a European naval group based around either a French or British aircraft carrier permanently on the sea. 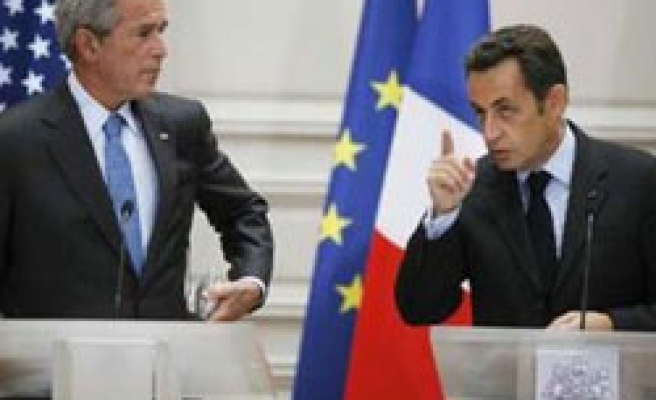 France will propose launching a European Union aircraft carrier group and a joint fleet of military transporters as part of efforts later this year to boost the EU military, French defence officials said.

The fate of other French proposals for closer defence cooperation was unclear after Ireland's rejection last week of a key EU reform treaty intended to facilitate better coordination of policy among European nations.

France takes on the presidency of the EU in two weeks and President Nicolas Sarkozy has flagged that he sees bolstering Europe's defence capacity as a precondition for a return to NATO's military structures after a four-decade absence.

Aides close to Defence Minister Herve Morin said negotiations with Britain were well-advanced on creating a European naval group based around either a French or British aircraft carrier permanently on the sea.

Other nations could then contribute frigates, submarines or refuelling vessels as required, the aides said.

Separately, Paris wants to fill longstanding gaps in air transport that have dogged European military operations by creating a fleet of the A400M heavy airlifter which defence group EADS will roll out later this month.

The project would operate on a timeshare basis allowing states to buy operational hours as required, a Morin aide said.

In Berlin, a government spokesman said Germany was prepared to consider proposals it expects French President Nicolas Sarkozy to unveil to create a European Union naval fleet. There was already a joint Franco-British initiative for a fleet, and Germany could play a part in this, pending an assessment of the plans, he said. How large the fleet could be, or when it might be created, was impossible to say, he added.

"We'll have to wait and see what sort of proposals the French presidency unveils," a Defence Ministry spokesman said.

France and Britain announced earlier this year a plan to upgrade Europe's fleet of helicopters to allow them to operate in harsh conditions such as in Afghanistan and Chad, where Western security missions have suffered shortages of air assets.

The French defence officials said they were also confident of launching a European satellite observation system that will subsequently be extended to space observation.

Other initiatives are likely to include military training exchanges that would allow, for example, Polish officers to complement their training in France and so help create a common European military culture.

That plan was based on the assumption that the so-called Lisbon Treaty of EU reforms will come into force next year, something which is no longer sure after Irish voters rejected the project last Thursday.

Also unclear is whether Britain will back a French push for permanent facilities to plan EU defence operations, which at present are run out of temporary headquarters hastily assembled in whichever state is leading a given mission.

One French source said Paris no longer wanted to create a full-blown EU military headquarters but proposed simply a 50-head team that could be increased to 150 planners for the duration of a given operation.