France's presidential candidates have exchanged verbal jabs during a sometimes ill-tempered televised debate that could help determine the winner of Sunday's run-off election. 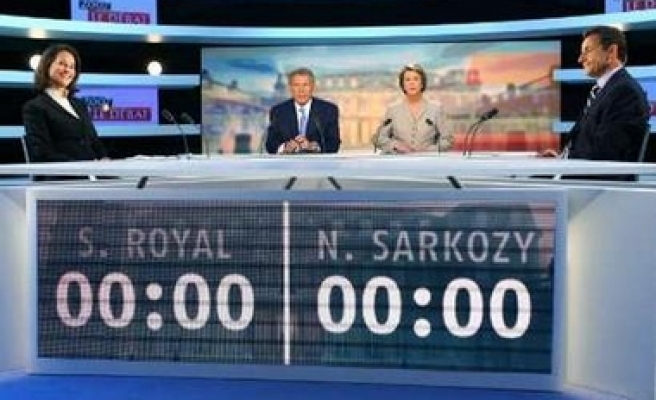 France's presidential candidates have exchanged verbal jabs during a sometimes ill-tempered televised debate that could help determine the winner of Sunday's run-off election.

Trailing in the opinion polls, Segolene Royal, the socialist candidate, came out fighting on Wednesday at the start of the two hour verbal clash.

She immediately lambasted the outgoing government, in which her rival Nicolas Sarkozy served as both interior and finance minister, saying: "What have you done during the past five years? There is a problem of credibility here.

"You are in part responsible for the situation in which France finds itself today," Royal said, often interrupting Sarkozy during quick fire exchanges on a range of issues from the economy to security, from nuclear energy to pensions.

She accused the government of failing to tackle unemployment and overseeing an increase in street crime.

Sarkozy found himself interrupted so often that at one point he asked: "Madame do you want me to complete a sentence?"

But he also used Royal's aggression against her.

"At least [this debate has] served one purpose, which is to show that you get angry very quickly, you go off the rails very easily, Madame.

"A president is someone who has very serious responsibilities," Sarkozy said.

They then traded arguments on ways to cut national debt, revive the economy and re-organise France's army of civil servants, getting especially heated over the 35-hour-week that the last Socialist government introduced.

Sarkozy said: "The 35-hour week was a complete catastrophe, it has to be said, for the French economy."

Royal responded by asking why the current government had failed to change the measure if it was such a disaster.

The only debate in the fierce election race was shown live on two main television channels and was expected to be watched by nearly half of France's 44.5 million voters.

Sarkozy topped the first round of elections on April 22 with 31.2 per cent of the ballot while Royal came second with 25.9 per cent.

They have since battled to win the backing of centrist voters who will hold the key on the May 6 run-off.

For Royal, the debate represented a last chance to overhaul Sarkozy, who has topped opinion polls since the start of the year and weathered constant opposition accusations that he is authoritarian.

It also gave her a chance to confront widespread scepticism that she is not ready to become president.

Sarkozy often seemed to hold back in the confrontation, speaking forcefully, but not landing as many jabs as Royal.

Both candidates have sought in recent days to downplay the importance of the debate.

But such events have proved important in past elections, notably in 1974 when Valery Giscard d'Estaing outfoxed the Socialist candidate Francois Mitterrand.

"I think I was elected because of this debate," d'Estaing told RTL radio on Wednesday, adding that the Sarkozy-Royal match could prove just as influential.

Sarkozy is one of the most forceful speakers in French politics and polls show more people think he has the stature of a president.

But advisers had urged him to play it safe in the debate and tone down his aggressive instincts.

Royal, aiming to be France's first woman president with a combination of left-wing economic policies and traditional socialist values, is seen as more sympathetic to everyday concerns but uncertain when it comes to policy detail. Last Mod: 03 Mayıs 2007, 10:02
Add Comment